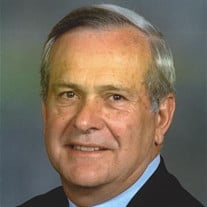 James Trice Mitchell – 10/7/1942 ~ 8/16/2020 Jim Mitchell – devoted husband, father and friend – died Sunday, August 16 in Memphis, TN. He was 77 years old. Jim is survived by his wife, Phyllis, daughter, Mary Beth Mitchell, son, Christopher Lee Mitchell, two grandchildren, Mitchell (Mitch) Trice Austin and AnnaGrace Mitchell. He is also survived by brother, Bill Mitchell and wife, Sue Gretchen, by his sister, Mary Scott Gyory and husband Chuck. He also loved his niece Kristen and nephews, Scott, Wood, and Steven – as well as his great nieces and nephews. Born… October 7, 1942 in Charlottesville, VA, to George William and Mary Lou Mitchell, Jim spent most of his life on the family farm and eventually enrolled in the University of Virginia, where he would graduate with a degree in Banking and Finance. It was during his time at the University of Virginia that Jim would meet his future wife, Phyllis, marking the beginning of a journey together that lasted over five decades. Jim and Phyllis just celebrated 55 years of marriage on August 14. Jim was a true patriot and loved his country. After participating in the ROTC for four years at the University of Virginia, Jim served 2 years in the U.S. Army during the Vietnam War – stationed in the Dominican Republic. He then remained in the U.S. Army reserve for several years before being honorably discharged. Jim will receive official military honors during his burial at the West Tennessee State Veterans Cemetery. Jim and Phyllis eventually put down family roots in Memphis, the place they call home and where they raised their children, Mary Beth and Chris. Jim was a good family provider and a loving and faithful husband and father. Starting his career as a pharmaceutical sales manager, Jim took great pride in his work and was known for his work ethic, reliability and integrity. Perhaps Jim’s greatest strength, however, was his ability to connect with people and invest in relationships, which became the bedrock of his business. After “retirement” Jim entered another career in the senior Lifecare industry as a salesman and client consultant. He loved helping his clients and considered his role as a ministry to the very end. Jim and Phyllis both have served faithfully at Christ Church in Bartlett, TN, for over 30 years. A long-standing elder at Christ Church, Jim lived a life of devotion and service to the Lord Jesus Christ – his greatest gifts being encouragement and wisdom. His love for Christ was demonstrated through his love for others, his love for his church, and his love for the word of God. Jim blessed so many with his life and will be deeply missed. Funeral Services will be at Christ Church Bartlett, TN – 5955 Yale Road – In lieu of flowers, the family has asked that all gifts and donations be made to Christ Church and designated in memory of Jim Mitchell.

The family of James T Mitchell created this Life Tributes page to make it easy to share your memories.

Send flowers to the Mitchell family.