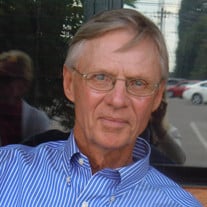 Jimmy Lovitt, 74, died on Monday, August 3, 2020 at Methodist Hospital Germantown. He died suddenly,after a brief illness. He was the son of Gloria and Fred Lovitt of Memphis. He leaves two sisters, Frosty Lovitt and Sara Lovitt of Memphis, and his closest friend, Nancy Mattern of Bluffton, South Carolina. He was predeceased by both of his parents, his sister Carol Lovitt, and his twin brother Ricky Lovitt. He graduated from White Station High School, and joined the Air Force, spending one year of duty in Vietnam. After spending two years in Greece with the Air Force, he attended, and graduated from, the University of Tennessee at Knoxville. Jimmy enjoyed a successful, lifelong, career in real estate, having been mentored by his uncle, Lloyd Lovitt, an established builder and developer in Memphis. Jimmy partnered with Chuck Wright, the son of the architect Claude Wright in Lloyd’s firm, Jacobson and Lovitt. He and Chuck built houses all over Shelby County. He also enjoyed working directly with Lloyd, and managed the sales force of the Lovitt Company Realtors for him. Jimmy and his twin brother Ricky shared a love of the outdoors, from the time they were boy scouts in Troop 55, working on their Eagle Scout badges together. Both were avid catch and release bass fishermen. When Ricky became mentally ill, in his early twenties, Jimmy was a champion for him, and directed his care for the rest of his life. Fishing was a source of joy for him, and a great outlet. He loved animals, and at his home in Eads, he delighted in sharing his property with the deer, raccoons, squirrels, birds, and foxes, who would come daily to eat and drink and bathe in the protected area he created for them. They will surely miss his kindness, of which, he had an abundance. Due to the Covid-19 virus there will be no ceremonies at this time. A celebration of Jimmy’s life will be held at a later date.

Jimmy Lovitt, 74, died on Monday, August 3, 2020 at Methodist Hospital Germantown. He died suddenly,after a brief illness. He was the son of Gloria and Fred Lovitt of Memphis. He leaves two sisters, Frosty Lovitt and Sara Lovitt of Memphis,... View Obituary & Service Information

The family of James Lovitt created this Life Tributes page to make it easy to share your memories.

Send flowers to the Lovitt family.