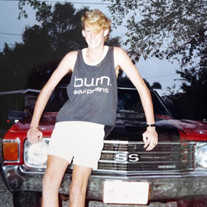 James, “JR” L. Nuss, 51, of Memphis, TN passed on May 9 2021 in Baptist Reynolds Memorial Hospice House, Memphis, TN. He was born April 29, 1970, in Memphis, TN. He was the son of Jimmie L Nuss and Patricia M Byrd. He graduated from Bodine High School in Memphis. Jim enjoyed cars, drag racing, fishing, and camping. He was the neighborhood kid, pleasant, polite, cheerful and respectful. After a severe head injury in a car accident when he was 16, he preferred to be called JR. While life changed for him significantly, he maintained a fondness for an old 49/50 Chevy pickup truck that he named the “Blue Goose”, roaming and making friends around the Southern St neighborhood (Memphis), listening to RAP music, creating art work, and having discussions with Bro Tevin and friends while enjoying a smoke from his favorite pipe. God was in his life and his favorite pillow that he slept with every night had the inscription, “Draw near to God and he will draw near to you, James 4:8”. Survivors include: his Mother Patricia M Kholberg, Father Jimmie L Nuss, Sister Laura M Johnson, Step Mother Judy A Nuss, Step Father Rob Kholberg, Niece Devin Johnson, Best Bro Tevin Morris, and several Aunts, Uncles, Nieces, Nephews and Cousins. His Grandparents and Uncle Bob Byrd preceding him in death. Cremation will be accorded. No formal service will be provided. In retrospect, JR accepted the circumstances that he had to live with. He did not complain but rather lived his life on his terms with the limited resources that were available. He was always upbeat and deserves a great amount of respect as many would have just given up. Rest in Peace with your God Son.

The family of James "JR" L. Nuss created this Life Tributes page to make it easy to share your memories.

Send flowers to the Nuss family.