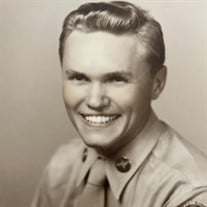 James Arthur Ganong, Jr., age 93, died April 3rd, 2022 after a brief battle with cancer. “Jimmy” Ganong was born December 25th, 1928 in Memphis, Tenn. to James A. Ganong, Sr. and Cecil W. Ganong. He is preceded in death by both of his parents, his wife Mildred L. “Millie” Ganong and a grandson, Ches Linebarier. He is survived by his loving children Steve Ganong (Celeste), Cheri Ganong Robinson (Johnny), Denise Linebarier (Chip), Don Ganong ( Jo), 10 grandchildren and 7 great-grandchildren with another one on the way. Jim worked his way through Memphis State and, later, law school by working the railroad at night. He started his own law practice whilst taking evening shifts at Central Station, but soon thereafter became a successful lawyer with a thriving practice. Furthermore, it wasn’t unusual to see him with the honor of filling in as a judge periodically. Jimmy was an accomplished Golden Glove Boxer and then fought in the lightweight division with many wins during his storied career. For years he even served as a ring judge. Jim loved his children and grandchildren dearly. He had a sharp mind and an uncanny memory of every single family member’s birthdate, including their current ages, and up until the last few years when his eyesight was failing, he made it a point to never miss a birthday call. Also known as “Grandaddy,” Jim always loved gathering with family for celebrations and holidays. Jim had the gift to gab and you rarely got a word in during a two-way conversation. He was an avid Bop dancer, and took great pride in showing off his trophies. He was often seen dancing at Town Village of Audubon and just two weeks ago took his last “dance” with his favorite dance partners; while he was in his wheelchair, he still had the rhythm as he spun his partners around and shook his limbs to the music. Jim was a long time member of the Ancient and Accepted Scottish Rite of Freemasonry, a tradition that his father, grandfather and mother (Eastern Star) were a part of as well. He was also a proud member of Shriners International, where he served for over 30 years. Additionally, Jim was particularly proud of being one of the founders of the Parkway Village Youth Football League. Jim enjoyed going to his cabin at Tunica Cutoff in Tunica, Miss. and spending time with his mother and children out on the pontoon boat trolling for crappie, or out on the speedboat teaching his children how to water ski. He enjoyed his latter years at Town Village of Audubon with all of his friends and his special friend, Rita Hayes. Jim especially enjoyed the entertainment every Friday afternoon, dancing to some of his favorite songs. You could say Jimmy Ganong enjoyed his life to the fullest, even to the very end, and it was in long conversations, telling stories, and dancing that his social life kept his spirit young and vibrant. The family would like to extend their deepest gratitude to Jim’s caregivers Charlie Bright, and Jo Ganong, his daughter-in-law. A celebration of life will be held on Friday, April 8th at 1:00 PM with visitation beginning at 11:00 PM at Memorial Park Funeral Home & Cemetery, 5668 Poplar Ave, Memphis, TN. The family requests that in lieu of flowers, donations be made to Ches’ Clothes Closet at St. John’s United Methodist Church, 1207 Peabody Ave., Memphis, TN 38104 or cleats901.com in honor of Jim’s late grandson Ches Linebarier. To view the service online, please click on the link below: http://webcast.funeralvue.com/events/viewer/71950/hash:D09681F9F45CC0C0

The family of James Arthur Ganong created this Life Tributes page to make it easy to share your memories.

Send flowers to the Ganong family.