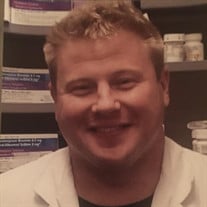 With deepest sorrow, announce the death of James Bradford (Brad) Doby, 38, of Memphis, who went to be with our Heavenly Father on December 31, 2020, from complications due to Covid-19. Brad was born January 2, 1982, in Memphis where he graduated from Harding Academy of Memphis, Class of 2000. He later attended the University of Tennessee where he obtained his Doctor of Pharmacy. As a board-certified pharmacy specialist, Brad served the role of pharmacy manager at the Walmart Neighborhood Market Pharmacy in Marion, Arkansas. Brad is survived by his daughter Molly Mae Doby; his sister Amanda Lauren (Mandy) Doby and son William Ashton Klinger; his sister Leigh Ann Doby (April); his brother William Barton Doby (Amy) and children, Drake and Ella; Brad was preceded in death by his parents, William Gerald and Paulette Tomlinson Doby; his maternal grandparents, Dee Daniel and Bobbie Lee Tomlinson; and his paternal grandparents, Claude Albert and Carrie Austin Doby. Brad was a loving father and a best friend to his sister Mandy. He was very close to his family, his friends, and also his beloved dog, Sam. Those who knew Brad, even just a little, have lost a shining light in their lives. He had huge heart and was known to make everyone he knew laugh. As a pharmacist, he was very intelligent and worked very hard for his patients with whom he established a genuine rapport. He also cared for his employees and colleagues and never passed up a moment to educate and share his knowledge to make those around him be better, not only as a person, but to be better in their profession. Heaven has certainly gained an angel. Visitation will be held on Tuesday, January 19, 2021 at 1 o’clock followed by a crypt-side service at 2 o’clock at Memorial Park Funeral Home and Cemetery, 5668 Poplar Ave, Memphis, TN, 38119, www.memorialparkonline.com. (901) 767-8930

With deepest sorrow, announce the death of James Bradford (Brad) Doby, 38, of Memphis, who went to be with our Heavenly Father on December 31, 2020, from complications due to Covid-19. Brad was born January 2, 1982, in Memphis where he graduated... View Obituary & Service Information

The family of James Bradford (Brad) Doby created this Life Tributes page to make it easy to share your memories.

With deepest sorrow, announce the death of James Bradford (Brad)...

Send flowers to the Doby family.