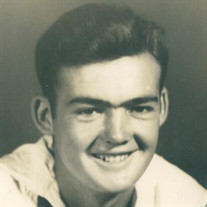 James William “Bill” Wages, Senior, was born on March 13, 1926 in Covington, TN, and peacefully passed away on March 24, 2022 in Collierville, TN. He was the son of William “Loss” and Irene Wages both of Memphis, TN. He came from a large family and he was the second oldest of eight children. At the age of 17, he enlisted into the Navy and served his country during World War II. He retired from the Navy as a Chief Engineman in 1975. Upon discharge from the Navy, he went on to work for the Illinois Central Railroad and then later for the Department of Defense where he retired from in 1986. He was happily married to Hazel Henderson Wages of Memphis, TN, for 57 years. They went on to have three wonderful children. He was preceded in death by his wife, Hazel and his oldest son James Wages, Junior. He leaves behind his son, Mark Wages (wife, Joanna) who resides in Southaven, MS, and his daughter Lindsay Conner of Oakland, TN. He has two grandchildren, Jennifer Lane Watson (husband, Thomas) and Derrick Lewis (wife, Erin) both from Olive Branch, MS, and two step-granddaughters Rachel Tatum (husband, John) of Taylor, MS, and Jody Holloway (husband, Keith) of Hernando, MS. He has many great grandchildren (Andrew Lewis, Cooper Lewis, Charlie Lane, Tucker Lewis, and Ellie Lewis, all of Olive Branch, MS. Sawyer Tatum of Taylor, MS, and Leevi Holloway of Hernando, MS). He also leaves behind three siblings (Janet Smith of Crossville, TN, Paul Wages of Aberdeen, MS, and Jerry Wages of Batesville, MS). He was loved by his family and his many friends, he could talk to anyone about any subject at any time, and he loved sharing stories from his time in the war. He loved playing golf and spending time with his “golfing buddies”. He was the kindest man there ever was and many people were blessed by just knowing him. He will be greatly missed and will be laid to rest on Wednesday, March 30, 2022, next to his wife at Memorial Park in Memphis, TN. In lieu of flowers, please send any donations in memory of Bill Wages to The Leukemia and Lymphoma Society.

The family of James "Bill" William Wages created this Life Tributes page to make it easy to share your memories.

Send flowers to the Wages family.