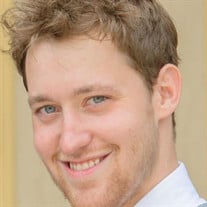 Jacob Paul Ryan passed away on Monday, July 13th in Germantown, Tennessee. Jake was born to David Ryan and Shannon Tanksley Barnett on November 12th, 1991 in Bloomington, Indiana. He received his diploma from Bedford North Lawrence High School in 2010. He attended college classes at Evansville University, Indiana State University, and Grand Valley State University studying forensic psychology, neuroscience, and biological psychology with the goal of developing psychopharmaceuticals. He was attracted to intelligence and inspired by knowledge. He had an unending drive to continuously learn and always encouraged others to follow their educational dreams. Jake had a passion for philanthropy and loved giving back to the community. His greatest philanthropic accomplishment was developing and implementing a program which provided free day care for single mothers continuing their college education. Jake enjoyed visiting and conversing with his friends, dancing for hours on end, photographing nature, floating down West Michigan rivers, and travelling the globe with his husband. Jake was preceded in death by his Papaw Jim Ryan, his Mamaw Donna Ryan, his Papaw Frank Tanksley, and his father David Ryan. He is survived by his husband Chad Wine, his dog Molly, his mother Shannon Tanksley Barnett (Eric), his Mamaw Kay Thimling (Darrell), his Mamaw Pam Johnson Pinto, his brothers Tanner Thimling (Emily) and Evan Thoms (Megan), his sister Coda Barger, his uncle Scott Ryan (Pammy), his aunts Carlen Guthrie (Sam), Susan Everett (Jayden) and Amber Pridemore, his cousins Bristol, Lexie, Ashton, Jaxon, Haevyn, Grace, Linkin, Charli, Isabella, Vera, and Kanean, his nieces Amara and Adalynn, his nephew Wyatt, and his self-made family of friends around the world too large to list. There will be celebrations of life at a later date in his hometown of Bloomington, Indiana, and in Grand Rapids, Michigan, where he always felt most at home. In lieu of flowers, his husband asks that you make a donation to a charity of your choosing in honor of Jake’s passion to make the world a better place

The family of Jacob Paul Ryan created this Life Tributes page to make it easy to share your memories.

Send flowers to the Ryan family.