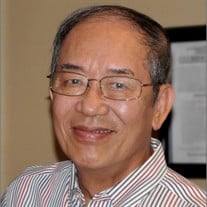 Jack Ting Woo, age 86 of Collierville, Tennessee, beloved husband, father, grandfather, uncle, and friend entered eternal rest on August 13, 2020. He is survived by his devoted and loving wife of 57 years, Sally Ho; his four children William Woo (Dawn) of Fuquay Varina, North Carolina; Lisa Revelett (Marlon) of Austin, Texas; Elinor Morris (Sam) of Madison, Mississippi; Eva Celli (John) of Collierville, Tennessee; eight adoring grandchildren – Ben, Daniel, and Matthew Woo; Jack and Noah Revelett; Samantha Morris; Emerie and Elin Celli; and many wonderful nieces, nephews and dear friends. Jack was born April 22, 1934, in Canton (now Guangzhou), China, the youngest of eight children. As a youth, he worked in the family business and eventually moved to live with older siblings and their families near Hong Kong. It was there he met his bride-to-be and lifelong partner, Sally. They married in 1963, and soon after, immigrated to the United States to settle in New London, Connecticut. In Connecticut they started their family, and he pursued his entrepreneurial dream of owning his own business. In 1971, Jack, Sally, and the children moved to the Mississippi Delta where they expanded their family and managed and owned various businesses in Cleveland, Leland, and Hollandale. In 1984, he opened the Pagoda Restaurant in Boyle, Mississippi, fulfilling his dream of creating authentic Chinese cuisine as a way of bringing people together. After his “retirement” in 1997, his love of interacting with people brought him out again to work part-time at Costco where he enjoyed being with his many co-workers and friends. Jack made Collierville, Tennessee, his home in the final years of his life with his loving family. To accommodate Chinese custom and honor the loss of our loved one, we ask that you eat a piece of candy to sweeten the bitter taste of death. Due to current conditions, there will be no public service or gathering at this time. A private ceremony is planned for a later date when family and close friends can gather safely. Thank you to those who have reached out to share memories, food, and gifts. Additionally, donations can be made in honor of Jack T. Woo, cancer survivor, to St. Jude Children’s Research Hospital, 501 St. Jude Place, Memphis, TN 38105.

The family of Jack Ting Woo created this Life Tributes page to make it easy to share your memories.

Send flowers to the Woo family.