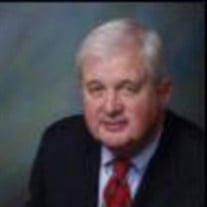 Dr. Jack Carter Sanford Jr. died peacefully in the home of his daughter Jessica and son-in-law, Dr. Paul Tackett, on Thursday, May 13, 2021 with his three daughters by his side. Jack was born in Covington, Tennessee to Jessie Alma and Jack Carter Sanford Sr. on February 1, 1938. He graduated from Byars Hall High School in Covington and received his undergraduate degree from Southwestern (now Rhodes College) in Memphis. After completing college he attended medical school at the University of Tennessee Center for Health Sciences where he obtained his Doctorate of Medicine in 1962. After graduation, Dr. Sanford joined the Armed Forces and served in the Medical Corps of the Air Force. This is when he developed his passion for obstetrics. He completed his service in two years and returned to UTCHS to begin a residency in OB/GYN which he completed in 1968. Dr. Sanford began a private practice known as Maury, Adkins, Graves and Sanford in 1968. Later the group incorporated as Memphis Mid-South OB/GYN Inc. Drs. Gayden and Jay Cox, among others, later joined the practice. Dr. Sanford was an acclaimed physician in the mid-south area and was loved by his many patients. It would not be an exaggeration to say he delivered well over 7,500 babies during his long career. He delivered the first baby to be born at Methodist Germantown while in the Emergency Department. Among his many accomplishments he was President of the OB/GYN staff at Baptist Hospital and presided as Chairman of the Credentials Committee. Dr. Sanford was one of the first investors and members of the Ambulatory Surgery Centers in Memphis. He became a pioneer in laser surgery after acquiring his training. He retired from private practice in 2018 ending a career that spanned six decades. Jack met his wife of 40 years, Fay Tullos Sanford, as she served as hostess at Baptist Hospital. She preceded him in death in 2012. They raised three loving daughters, Annie Kate Sanford Worley (Justin), Shelley Sanford Owens (Thomas), and Jessica Sanford Tackett (Paul). The family has fond memories of their times spent together in Naples and Pickwick Lake. He was affectionally known as Captain Jack to many friends who joined his family at Pickwick Lake. Each daughter chose to celebrate their marriage in the beautiful gardens of the Sanford home, Boxwood Acres. Their parents are dearly missed. Jack leaves behind 7 grandchildren whom he loved to ride on his knee and share mints that he kept in his pockets; Parr, Eloise and Walt Worley, Chambers and Mac Tackett, and Tullos and Boone Owens. Jack also leaves behind his wife of 5 years, Barbara Huggins Sanford, his sibling Robert Sanford and his wife Jan, and his nephew Rob Sanford and his wife Daphne. Jack had an immense love of golf and would spend hours on the golf course not only playing but also collecting lost golf balls. He always left behind a trail of golf balls. Jack was a long time member of Second Presbyterian Church and enjoyed attending his Bible Study group. Funeral services for Dr. Jack Carter Sanford Jr. will be held at Second Presbyterian Church on Wednesday, May 19th, 2021. The family will receive friends for visitation at 11:00 am with memorial service to follow at 12:00 noon. In lieu of flowers the family requests that memorials be sent to American Cancer Society, St. Jude Hospital or Church Health Center.

Dr. Jack Carter Sanford Jr. died peacefully in the home of his daughter Jessica and son-in-law, Dr. Paul Tackett, on Thursday, May 13, 2021 with his three daughters by his side. Jack was born in Covington, Tennessee to Jessie Alma and Jack... View Obituary & Service Information

The family of Dr. Jack Carter Sanford Jr. created this Life Tributes page to make it easy to share your memories.

Dr. Jack Carter Sanford Jr. died peacefully in the home of his...

Send flowers to the Sanford family.