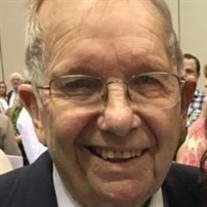 Jack Miller, 88, of Memphis, TN, passed away March 24th. Jack was born in Memphis, TN, to Frank L. Miller and Ollie P. Miller and grew up in mid-town. He attended Sacred Heart Grade School and graduated from Christian Brothers High School in 1951. He became the Golden Glove Champion in 1948. He went to work for his dad and with his brother at Frank L. Miller Printing until leaving in 1957 to work for Memphis Light Gas & Water as a master gas fitter, retiring 27 years later. He also owned Miller Heating for over 40 years. Jack attended Memphis State University but left to join the Marine Corps in 1953, serving as a machine gunner with the 1st Marine Division in the Korean War. As a child he was a Boy Scout. Boy Scouting was in his blood. He and his brother were scouts, and their dad was a member of the very first Boy Scout troop in Memphis. Jack was also active in scouting as an adult, spending 10 years with cubs/scouts (1966-1976). He was the scoutmaster of Troop 9 for many years and ushered many young men to the rank of Eagle Scout. He was a collector of all things military and made many re-enacting convoys in his beloved WWII Jeep. He was also known for being one of the best joke tellers—remembering every joke he ever heard. Jack is preceded in death by his parents Frank & Ollie; his beloved wife of 31 years, Betty Miller; sister Margaret Hemmen; brother Frank L. Miller, Jr.; and step-son Dale Huffman. He is survived by his son Jack Miller, Jr. (Tami) of Meridianville, AL; daughter Lisa Jean Hunt (Greg) of Memphis, TN; step-daughter Pam McGaha (John) of Bath Springs, TN; step-son Cliff Huffman (Angie) of Sewannee, TN; and numerous grandchildren and great-grandchildren. Visitation will be at Memorial Park Funeral Home on Thursday, March 31, from 5-7 pm followed by a service on Friday, April 1, at 11:00 am and burial at Memorial Park Cemetery with full military honors. In lieu of flowers the family requests donations be made to St Jude Children’s Hospital or a charity of your choice.

The family of Jack Miller created this Life Tributes page to make it easy to share your memories.

Send flowers to the Miller family.