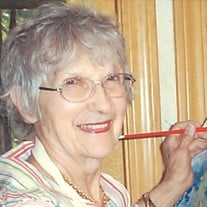 Irene Adele (Bruce) Mitchell, 101, died peacefully on October 4, 2020 in Mustang Ridge, Texas, where she had been living for the past six years with her loving youngest daughter, Florence. Mrs. Mitchell was predeceased by her two sons, William Wright and Peter Bruce, and is survived by her four daughters, Elizabeth Glenn Mitchell, Katherine Irene (Mitchell) Wade, Irene Adele (Mitchell) Vermillion and her husband Robert, and Florence Cunningham (Mitchell) Dews; three grandchildren; and six great grandchildren. She was also predeceased by her sisters, Eva Gene Bringle and Betty Miller of Memphis. Mrs. Mitchell was born in Little Rock, Arkansas, the daughter of Edwin Lawson Bruce, Jr., a civil engineer, and Mary Elizabeth (Cunningham) Bruce, Jr., a classically trained pianist. The family moved to Memphis in the 1930’s, location of the new headquarters of the E.L. Bruce Company, a manufacturer of hardwood products. Mrs. Mitchell graduated from Hutchison School for Girls and during her high school years enrolled in art classes at Memphis College of Art where her talents in the fine arts gained recognition. After a freshman year at Randolph-Macon College for Women in Virginia, she transferred to Sophie Newcomb College in New Orleans, where she studied with the painter, Walter Anderson. Upon her return to Memphis, she worked for the U.S. Army Corps of Engineers drafting cartographic maps. In 1943, she married William Wright Mitchell, Jr., a Memphis civil attorney, who served his country with Honor and Distinction as a Lieutenant and Navigator on B-17s in the US Army Air Force during WWII. He later became an Army flight instructor. The couple later settled in Germantown, Tennessee to raise their six children. An avid plein-air painter, Mrs. Mitchell documented many iconic scenes of Memphis - such as the gayly-colored boat houses that lined the downtown river front in bygone days. In Germantown, she painted its townspeople, stores, and churches, its fields and farms, and moments in her children’s adventurous country life. After her children were grown, she studied with noted painters at their studios in San Miguel de Allende, St. Thomas, the Adirondack region of New York State, California, and Boston. She has shown her work in a number of Memphis and Germantown art shows and is the recipient of several awards. Mrs. Mitchell held a deep-seated belief in the power of the spiritual dimension and alternative health practices. She was a practitioner of sitting meditation, and for many years meditated with a group of friends. She was a Reiki Shoden Level practitioner. She was a regular practitioner of Tai Chi with a group formed at her church. She was a gardener who tended her healthy plants, herbs, and flowers with the added boost of holistic practices adopted from the Findhorn community she visited in Scotland. Mrs. Mitchell was a member of the Junior League of Memphis and Les Passee. She was a volunteer for MIFA Meals on Wheels delivering lunches to seniors at their homes. She was a member of the congregation of St. George’s Episcopal Church in Germantown. Mrs. Mitchell is buried in Memorial Park Cemetery, 5668 Poplar Ave, Memphis, TN 38119. A graveside memorial service with family and friends will be scheduled at a later date. " In lieu of flowers, the family asks that memorial contributions be made to The Emmanuel Center (www.emmanuelcentermemphis.org), whose programs inspire spiritual, physical, and educational growth of low-income children and adolescents residing in South Memphis. " To share a memory or offer a condolence visit https://www.memorialparkfuneralandcemetery.com.

Irene Adele (Bruce) Mitchell, 101, died peacefully on October 4, 2020 in Mustang Ridge, Texas, where she had been living for the past six years with her loving youngest daughter, Florence. Mrs. Mitchell was predeceased by her two sons, William... View Obituary & Service Information

The family of Irene B. Mitchell created this Life Tributes page to make it easy to share your memories.

Send flowers to the Mitchell family.