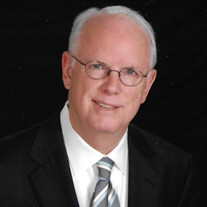 Harry B. Risinger, Jr, 75, of Collierville, TN, passed away on January 31, 2022. He was born on August 28, 1946 in El Dorado, AR to Harry B. Risinger, Sr. and Amanda Risinger. Harry’s family moved to Searcy, AR in 1955 on his 9th birthday and he lived there until 1968. He attended Harding Academy in Searcy, graduating in 1964. He then attended college at Harding University, graduating in 1968 with a Bachelor of Science in Accounting degree. Later, he earned a Masters of Business Administration from Memphis State University in 1974 and became a certified public accountant. Harry was introduced by mutual friends to the love of his life, the former Janice (Jan) Robinson. Harry and Jan were married on June 6, 1970. Together, they had two sons, Matt and Adam. After graduating from college, Harry enlisted in the U.S. Army during the Vietnam War. In total, he served 3 years, including a short stint in Vietnam. He was then stationed at the Pine Bluff Arsenal where he completed his service. Harry joined W.R. Grace and company in 1972 as a junior analyst in the agricultural chemicals group. As a result of his skills and leadership, Harry was frequently given more responsibilities with the company. Among his accomplishments were being named group Chief Financial Officer and corporate Vice President. Subsequently, he became President and Chief Executive Officer for Seminole Fertilizer Corporation. In 1993, Harry changed careers and began working as a financial advisor. He ultimately retired after an additional 16 years, with the title of First Vice President of the Memphis branch of Morgan Stanley. In addition to these professional roles, Harry served in many volunteer leadership roles. Harry served as an elder at the Millington Church of Christ for over 25 years. He also taught Bible classes for both youth and adults for most of his adult life. Harry was a member of the Board of Trustees for Harding University for 32 years, including serving a term as the Chairman of the Board. Over the years, he was a board member for Agape Child and Family Services, Truth for Today World Mission School, and the Christian Chronicle. Harry is survived by his wife of 51 years, Jan, sons Matt and Adam Risinger, daughters-in-law Julie and Jessica Risinger, grandchildren Alyssa, Aniston, Noah, and Eli Risinger, sisters Linda Stanley and Amanda (Mandy) Jones, and many other dearly loved family and friends. Visitation will occur on Saturday, February 5, 2022 from 4:00 – 7:00 PM at Memorial Park Funeral Home. The funeral service will occur on Sunday, February 6, 2022 at 2:00 PM, also at Memorial Park, with graveside service to follow. Arrangements have been entrusted to Memorial Park Funeral Home and Cemetery, 5668 Poplar Ave., Memphis, TN 38119, 901-767-8930. In lieu of flowers, please consider a memorial gift to either Children’s Homes, Inc. in Paragould, AR or Harding School of Theology in Memphis, TN. To view Mr. Risinger's services online, please click on the link below: http://webcast.funeralvue.com/events/viewer/68675/hash:47FFAEE91E9A9D82

The family of Harry B. Risinger Jr. created this Life Tributes page to make it easy to share your memories.

Send flowers to the Risinger family.