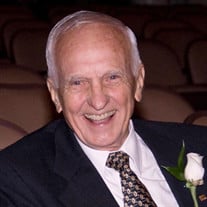 Harold Thomison Hogue passed away peacefully on December 28, 2020, at age 94. Harold was born September 12, 1926 in Dayton, Tennessee, son of Herbert (“Jack”) and Lola Gentry Hogue. He graduated from Red Bank High School in 1944 and volunteered for the Navy, serving as an Electrician’s Mate on the USS Cockrill, a Navy Destroyer Escort in World War II. His ship was in port at Pearl Harbor when the first atom bomb was dropped on Hiroshima. After the war ended, Harold entered the University of Tennessee, graduating with a degree in Civil Engineering. Harold married his college sweetheart Flora Mae Nail on December 22, 1950. He began his engineering career with the Tennessee Valley Authority in Knoxville and then worked for the Nashville Bridge Company before settling their family in Memphis where Harold owned his own company, Engineered Structures, for 10 years. In 1981, he joined the Federal Express corporation as a Project Engineer, retiring from FedEx in 1995. Harold was a long-time member of Bellevue Baptist Church as well as Germantown Baptist Church, where he served as a deacon. He was an active member of the senior adult group, and he and Flo were well-known for their entertaining skits and performances for the group. Harold was also active in the Forever Young Veterans, traveling with this group to the National WWII Veterans Monument in Washington, DC and the WWII Museum in New Orleans. Harold was a loving husband, father, grandfather and great-grandfather. Predeceased by his parents and his sister Jackie Hogue Gentry, Harold leaves his wife of 70 years, Flora Mae. He is also survived by three sons Bill Hogue, Bob Hogue, and David Hogue (Sheri); six grandchildren Michael Hogue (Whitney), Heather Mullins (Justin), Will Hogue (Carlee), Rachel Hogue, David Hogue (Rachel) and Michelle Hogue, and nine great-grandchildren. Funeral services will be held on Monday, January 4th at Memorial Park Funeral Home and Cemetery, 5668 Poplar Avenue in Memphis. Visitation begins at 12:00 noon with the service to follow at 1:00. To view the service online please click http://webcast.funeralvue.com/events/viewer/44385 In lieu of flowers, the family requests memorials made to Forever Young Veterans, 185 S. Center St. #110, Collierville, TN 38017. Foreveryoungvets.org

The family of Harold Thomison Hogue created this Life Tributes page to make it easy to share your memories.

Send flowers to the Hogue family.