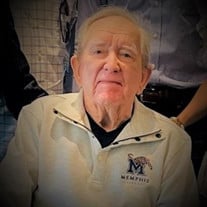 Harold Lloyd Graeter, 88, went to heaven September 22, 2021. Harold was a dedicated, loving husband, father, grandfather and great-grandfather. He was born April 6, 1933 in Paige, Texas. His older sisters named him Harold Lloyd after the 1930’s silent movie star of the same name. Harold was preceded in death by his parents, Ernest and Ellie Graeter; his wife of 58 years Bonnie; and nine brothers and sisters. Harold is survived by his daughter Cynthia Graeter and son Harold Graeter, Jr. (Dawn). Papaw, as Harold was called by his grandchildren, is survived by Austin Graeter (Jennifer), Cameron Graeter, Sydney Graeter, Austin Fulwood and great-grandchildren Charlotte Graeter and Adalyn Graeter. Harold is also survived by many family members in Texas, including sister-in-law Louise Graeter and many nieces and nephews. Harold graduated from Reagan High School in Houston and the University of Houston. Harold met Bonnie while she was in high school. After five years of dating (and a car loan Harold never repaid Bonnie), they married June 17, 1956. After ROTC at UH, Harold was commissioned as a Second Lieutenant in the United States Army. Harold and Bonnie’s early life included stops in Ft. Lee, Virginia and Germany. He served in the Army and the Army Reserves, rising to the rank of Captain. After his military service, Harold went to work for Colgate-Palmolive and retired from C-P after a distinguished 30-year career in sales. In retirement, Harold and Bonnie enjoyed traveling to Gulf Shores, back to Texas to visit family and many other destinations. But most importantly he enjoyed being Papaw to his grandchildren and great-grandchildren. Harold was a faithful, active and supportive member of Immanuel Lutheran Church and Immanuel Lutheran School. His other interests, activities and joys included growing a vegetable garden every year, serving as a Boy Scouts leader, enjoying baseball games, following the stock market, old western tv shows and movies, the Marty Robbins songs “El Paso” and “Big Iron” and his favorite desserts, his mother’s German coffee cake and blackberry cobbler. Today, Harold’s family and friends celebrate his life and enjoy the wonderful memories they have of him. They also rejoice that he is in heaven praising Jesus, reunited with his “Sweetie” Bonnie. Harold always called his native, beloved home state of Texas, “God’s Country”. Now he is truly in “God’s Country”, in the place the Lord had prepared for him. Visitation will be Wednesday, September 29, 2021 at Immanuel Lutheran Church from 11 a.m. to Noon. A service to celebrate his life will follow at Noon, with burial at Memorial Park Cemetery on Poplar Avenue. In lieu of flowers, please make a memorial donation to the Grese-Sohn Endowment at Immanuel Lutheran Church. 6325 Raleigh-LaGrange Road; Memphis, TN 38134 We love you Daddy, Pop, Papaw!

The family of Harold Lloyd Graeter created this Life Tributes page to make it easy to share your memories.

Send flowers to the Graeter family.