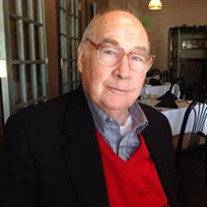 Howard Clarence (Wes) Westmoreland, aged 91, died in the early morning hours of November 18, 2020. He leaves his wife Erwin, three children (Barbara, Bob and Sue), two step-sons (Wesley and Clay), and five grandchildren. He was born into a farm family near Tupelo, Mississippi to Robert Whitfield Westmoreland and Dorothy Ann Estes Westmoreland. He was devoted to his two sisters and two brothers and eleven nieces and nephews. He was the last surviving of his siblings. He was proud of his service in the army between the Korean and Vietnam Wars. He attended Itawamba Community College and graduated from Mississippi State University with a degree in agriculture. He was a very proud and loyal contributor to both alma maters. He married Janie Thomas in 1953. They moved to New Orleans where Wes began his life’s work for Prudential Insurance Company, initially making farm loans and moving up rapidly to making agricultural investments for Prudential. He managed offices in Jackson, Mississippi; Houston, Texas; and Memphis, Tennessee. Wes was known within the company for making good hires. He retired from “The Pru” in 1981 as Vice President of Agricultural Investments at the headquarters in Newark, New Jersey. Along the way, he and Janie had three children and a very happy and successful marriage. Janie died unexpectedly, at age 44. Wes was very fortunate to be introduced to his beloved second wife Erwin Burrow by mutual friends. He and his “Lady Erwin” married in 1978. Her two sons and later their wives and children became close and integral parts of the Westmoreland clan. He was proud of his children and grandchildren and bragged on them at every opportunity. He retired and started his own company with his lifelong friend, Bob Waits. They were very successful - buying, developing and selling farmlands across the midsouth area. Dad was called ‘Big Daddy’ by his grandchildren, ‘Uncle Clarence’ by his many nieces and nephews and ’Wes’ by almost everyone else. He insisted that his mama had always called him ‘Precious.’ He in turn gave nicknames to his beloved caregivers at The Village at Germantown where he spent his last years. He loved to travel and camped across the country many times to visit Janie’s family in Washington. He and Erwin travelled everywhere in the world - Europe, Japan, China, Russia. He loved gardening and always raised a large garden. He grew tomatoes and loved to eat them. In tomato-growing season, Janie would peel a platter-full and he would pass it around the table once. When the platter came back to him, he claimed the remainder for himself. He loved the beach and his children have fond memories of jumping the waves with him in Florida. If necessary, we would have had to rescue him since he couldn’t swim a lick. He and Erwin bought a condo in Destin that the whole family enjoyed using for many years. He loved people and never met a stranger. Dad liked to hear your stories and he loved to tell you his. He was famous for tall tales. For example, he told us that he walked five miles to school every day even when it snowed. When questioned, his mother expressed surprise and said “Honey, don’t you know that bus turned around in our front yard!” He was a lifelong Presbyterian and a deacon of Germantown Presbyterian Church at the time of his death. He loved to sing and had a good tenor voice. When we were kids, we thought that “This is My Father’s World” was about our daddy. He loved to sing old fashioned hymns like ’I Come to the Garden Alone’ and ’The Church in the Wildwood’ with his family on road trips. He was handsome and liked to get dressed up and look good in nice clothes. He wore short “britches” until the autumn was well advanced. He loved pretty girls. He was a remarkable man and we will never forget him. Wes knew how to be happy. A memorial service is planned for a later date. A gift in his memory may be sent to the music department of Germantown Presbyterian Church, 2363 South Germantown Road, Germantown, Tennessee, 38138, or to the charity of your choice.

The family of H.C. (Wes) Westmoreland created this Life Tributes page to make it easy to share your memories.

Send flowers to the Westmoreland family.