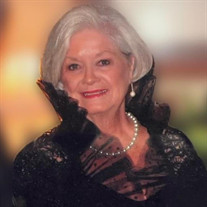 The beloved and indomitable spirit of Gloria T. Guererri was called home on November 19, 2021, to be joyfully reunited with her husband (Rich- ard “Dick” Guererri) and the two sons (Richard S. Guererri and Darwin B. Guererri) that preceded her. Gloria was born on July 17th, 1935, to James Edward Thornley and Ruth Williams Thornley in Moncks Corner, SC. She is one of six siblings: Billy Thornley (deceased), Robert “Bobby” Thornley (deceased), Frankie McGee of Wake Forest, NC, and Yvonne Sineath of Seneca, SC. Diane Thornley (deceased) She attended high school at St. Stephens High, during which time she modeled for local stores and businesses and was crowned the town’s Wa- termelon Queen (something that comes as no surprise to those that knew her). Her beauty and vivacious personality caught the attention of Dick Guererri, a football and baseball player at the Citadel whom she met by chance at a party. It was love at first sight, and they were married soon after on October 24, 1957. Together, she and Dick raised four lively, rambunctious sons that kept her hands full as she supported Dick in his career as an engineer, first at the Stennis Space Center in Louisiana followed by his long tenure at FedEx in Memphis, TN. However, she still made time to establish an impressive career of her own as a retailer and entrepreneur, getting her start at Julius Lewis, then going on to become the manager of Ashley’s of Memphis before opening her own bridal store called Gloria’s Mother of the Bride, which she owned and operated for over 20 years. Gloria was very social and an active member of her community. She and her family participated in the Memphis Italian Festival for over 10 years, and they are longtime members of the St. Louis Church, where they loved to take part in the annual Hole in One festival. When her sons Darwin and Rick both passed away. Gloria and Dick established scholarship funds in each of their names at Christian Brothers High School, which they put on an annual Guererri Memorial Golf Tournament for over 10 years to raise funds for. Gloria never met a stranger, and she was blessed to be a “second mother” and “best friend” to so many. She is survived by her sons Edward Guererri of Wellington, FL, and John Guererri (Dale) of Memphis, as well as her grandchildren: William Guer- erri (Alexandra), Samuel Guererri, Caroline Trommels (Stephen), Paige Kolakowski (Austin), John Darwin Guererri, Thomas Guererri, Savannah Guererri, and Ashlyn Guererri; as well as her great-grandchildren, Olivia Trommels and Frances Trommels. The family will receive friends on Friday December 10, 2021, from 12:30pm to 1:30pm, at St. Louis Catholic Church, followed by a Funeral Mass at 1:30 pm. The interment will follow Mass at Memorial Park Cemetery. The family will host a reception following the interment at St. Louis Catholic Church.

The beloved and indomitable spirit of Gloria T. Guererri was called home on November 19, 2021, to be joyfully reunited with her husband (Rich- ard &#8220;Dick&#8221; Guererri) and the two sons (Richard S. Guererri and Darwin B. Guererri) that... View Obituary & Service Information

The family of Gloria T. Guererri created this Life Tributes page to make it easy to share your memories.

The beloved and indomitable spirit of Gloria T. Guererri was...

Send flowers to the Guererri family.