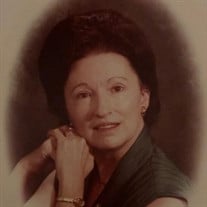 Geraldine (Latshaw) Kelly Nash 1927 - 2021 Gerry Nash, as she like to be called, departed for Heaven peacefully, surrounded by her children and son-in-law, Harold (Tony) Carter, in their home in Atoka, TN on Saturday, November 20th. She was 94. To us she was " Mom," a blessed title she will hold forever. Born January 14, 1927 in Memphis, TN to Vernie William and Lorna (Hill) Latshaw, she was the youngest of three daughters. Her sisters, Hazel M. Murgatroy and Muriel V. Ferguson, predeceased her. Her ancestry includes participants in the French and Indian War, Civil War, and her father in World War I. Additionally, her father descends from the Bern, Switzerland Anabaptists of the 1600's, some imprisoned for their faith in Christ. Her religious and patriotic roots run very deep. Gerry was a member of Cherry Road Baptist Church, Memphis, TN. She began a career working for Western Union as a Teletypist at the age of 18 in 1945. Unafraid to venture out west, Western Union detailed her, for a short period of time, to Los Angeles, CA in 1946. It was there she met our dad, John Elvin Kelly (1925-1994), from Omaha, a handsome Marine stationed at Camp Pendleton. After his discharge, he moved to Memphis where they were married October 8, 1951. From this union three children were born: Bruce Elvin Kelly, Rhonda Gail Kelly (1958-1968), and Brenda (Kelly) Carter. Upon completing barber school, dad opened his own shop in Memphis at the corner of Trigg and Mississippi Blvd., and mom continued with Western Union. Not wanting to drive, she walked several blocks to take the city bus to downtown Memphis for many years. She took driving lessons, in the summer of 1976, so she could obtain her driver’s license before her daughter did. Her first car was a Spirit of ‘76 Chevy Nova. She retired in 1985. In 1986, she married Millard Filmore Nash (1926-1995). Mom loved us very much. One of the great tragedies of her life was the loss of her daughter Rhonda to a sudden illness at the young age of ten. She never got over that pain. Her family, friends, and neighbors were at the forefront of her life. Thinking of and doing for others provided her great joy throughout her life. Thanksgiving and the Christmas Season were her favorite times of the year. Mom did not have to do last minute Christmas or birthday shopping since she thought of each person and picked out their gifts in advance throughout the year. She was unselfish and did not want to leave anyone out. Before and during her retirement years, our mom’s thriftiness generously helped clothe her grand and great-grandchildren. She taught us many valuable lessons in life which will not be forgotten. Mom has a great posterity of three children, eight grandchildren, 23 great grandchildren, and three great-great grandchildren. Three grandchildren also predeceased her. Her reunion on the other side with those whom she loved is surely filled with much joy and rejoicing. This is the reward for believing in and having faith in our Lord Jesus Christ and living a good, clean life. We are sad, but also grateful that her suffering has come to an end. We love and miss her very much. We thank all of those who assisted in her final days: family, Methodist Healthcare Hospice - nurses, nurse’s aides, and hospice Chaplain. The family will receive relatives and friends on Tuesday, November 30 at 1:00 p.m. with a funeral service to follow at 2:00 p.m. all in the Fireside Chapel of Memorial park Funeral Home. Interment to follow at Memorial Park Cemetery In lieu of flowers please donate to her favorite charity - St. Jude Children’s Hospital. Memorial Park Funeral Home and Cemetery, 5668 Poplar Ave, Memphis, TN, 38119. (901) 767-8930. To view the webcasted funeral service for Mrs. Nash please click the link below: http://webcast.funeralvue.com/events/northstar/64469/hash:04BCB1240BA6123E

Geraldine (Latshaw) Kelly Nash 1927 - 2021 Gerry Nash, as she like to be called, departed for Heaven peacefully, surrounded by her children and son-in-law, Harold (Tony) Carter, in their home in Atoka,... View Obituary & Service Information

The family of Geraldine (Latshaw) Kelly Nash created this Life Tributes page to make it easy to share your memories.

Send flowers to the Nash family.