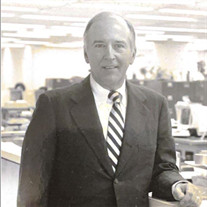 George Baker Long, Jr., 88, passed away peacefully at his home Tuesday, December 28. He was surrounded by his two daughters and loving caregivers. George was born on March 21,1933 in St. Louis, Missouri. He completed his bachelors degree in Economics at the Wharton School of Business at the University of Pennsylvania. He went on to receive his Master’s degree in Economics as well. His love of learning continued throughout his life as he attended the Meeman Center for Lifelong Learning at Rhodes College for over 25 years. George served our country, at sea, in the Korean War as a Lieutenant in the Navy for four years and continued in the Reserves for 15 more years. He was a wonderful resource to many in the Memphis real estate community, an active member of the Appraisal Institute for over 50 years, holding it’s MAI designation. He performed commercial and residential appraisals, economic/feasibility studies, commercial mortgages representing institutional investors, and with partner, Jay Daneman, constructed approximately 500 homes. He was managing partner with Nonconnah Corporate Center, the Shelby County Assessor of Property and operated Real Estate Analysis since 1976. He was a member of Second Presbyterian Church for over 60 years and enjoyed serving as a founding board member of the Christian Psychological Center and as the chair of the Diaconate. In later years he enjoyed the friendship of many in the Chapel class. George loved to travel, especially to the mountains “out west,” where he pursued two lifelong passions: skiing and photography. He was an award winning photographer and especially enjoyed capturing God’s beautiful creation. An avid skier for over 50 years, he passed this love on to his daughters and later became a proud member of the Memphis Golden Age Ski Club. His last ski trip was to Park City, Utah, when he was 84! He was preceded in death by his wife of 60 years Rosa Nell Long and beloved by his two daughters: Louise (Long) Coleman and Julia (Long) Santos. Louise and Julia are thankful to God for the provision of such a loving, kind, and generous father. He is also survived by his son-in-law Todd Coleman, and grandsons Josh, Jeremiah, and Joseph Coleman, TR and Wade Santos, granddaughter Elaina Santos, and half-sister Linda Clifton. Visitation will be held at 10:00 a.m. Friday, January 7, 2022, in the Louise Salmon room at Second Presbytrian Church followed by a memorial service at 11:00 a.m. in the Chapel. The Reverend George Robertson and the Reverend Gerry Peak will officiate. In lieu of flowers, the family requests donations be made to the Second Presbyterian Church Christian Psychological Center.

George Baker Long, Jr., 88, passed away peacefully at his home Tuesday, December 28. He was surrounded by his two daughters and loving caregivers. George was born on March 21,1933 in St. Louis, Missouri. He completed his bachelors degree in... View Obituary & Service Information

The family of George Baker Long Jr created this Life Tributes page to make it easy to share your memories.

George Baker Long, Jr., 88, passed away peacefully at his home...

Send flowers to the Long family.