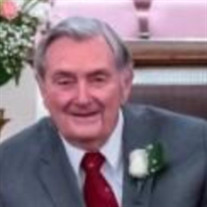 George Waller King passed away peacefully on September 14, 2021. He was born on March 9, 1932 in Brookhaven, Mississippi to John and Marybelle King. With his only brother, John Jr., he grew up on the campus of Mississippi College in Clinton, MS. His early childhood was spent as a student and a four star athlete at Clinton High School, graduating in April, 1950. When a junior in high school at the at of 16, King joined the United States Marine Corps Reserve in Jackson, MS. He had accepted a football scholarship to play at the University of Mississippi, but on his graduation day from high school he was immediately called to active duty status in the Marine Corps on the date of the North Korean invasion into South Korea. His was the second Marine unit to be activated in this country. He received advance combat training at Marine Corps Camp Pendleton in California before shipping our for Korea. King served with Easy Company, First Marine Regiment for 13 months of combat during which he received a battlefield promotion to Sergeant. His Marine squad was front line in the battles to preserve the integrity of the Republic of South Korea. His squad was decimated in the battle for Hill 749 in North Korea. He was a survivor of these battles through the summer and fall and the frozen winter of 1951. For his action against enemy forces in the mountains of Eastern Korea, King was awarded 5 battle stars, 2 United States Presidential Citations, the Korean Presidential Unit Citation, the Combat Action ribbon, the National Defense Service Medal and the Republic of Korea Service Medal. Upon his return from Korea, King was prominent in acknowledging the Memphis Korean Community. His leadership was responsible for the erection of the Korean Memorial Monument in Overton Park. King received a total of 35 awards from local Marine Corps Reserve where he served 8 years as Commandant and he was awarded the Marine of the Year in 2007 and 2012. Included in his awards was a commendation from the Korean Ambassador to the United States and other national and local leadership. He was responsible in re-activation of the Memphis Marine Corps League from a membership of 6 tired World War II veterans in the 1980's. Present membership is over 100 Marine Veterans and Naval Corpsmen. King's desire after discharge was to go to college and to get married, he did both. His football prowess at Mississippi College was highlighted in 2012 as he was inducted into the National All American Football Association. He then entered the School of Pharmacy at the University of Tennessee and finished his undergraduate degree at Memphis State College. King was honored as the very first student to be officially enrolled in night school at Memphis State College, now the University of Memphis. After his graduation from college, King was employed by the start up company, The Holiday Inns of America. At that time they had 6 Holiday Inns, all in Memphis. When Bill Walton and Wallace Johnson joined Kemmons Wilson in those early days, they expanded their visions into a national network of Family Inns along the nations highways. King served for 4 years as their purchasing agent. With the blessing of those men, he then formed his own company, Chemical Specialties, Inc. in 1962. His company was located here in Memphis and served the maintenance needs of the Holiday Inns nationally. He sold Chemical Specialties in 1999 and took a needed retirement. The company is now in their 60th year of serving the janitorial and maintenance needs of distributors in the 25 surrounding states. King had the privilege of serving as a long time Deacon at Kirby Woods Baptist Church, including 8 years as chairman and 25 years as the men's Bible teacher. He continued worshipping with the fellowship of Cornerstone Baptist Church of Germantown. His love for Biblical history took him to Israel and the Middle East 17 times for study courses and archaeological work. He served on the Advisory Board of Theological School in Jerusalem. He enjoyed presenting lectures on Bible History to local churches, schools, civic clubs and Bible study groups in the Mid-South area. The Lord blessed his marriage to Gwendolyn Brake of Memphis. Their 67 year marriage gave them three sons; David King (Linda) of Atlanta, Clay King of Memphis and Jay King (Katrina) of Austin Texas. There are 6 grandchildren and 2 great-grandchildren. Following the death of Gwen, George's first wife, he was further blessed to marry and to spend his final years with Brenda Williams King of Jackson TN. The family will receive relatives and friends on Friday, September 17, 2021 at 1:30 p.m. with a funeral service at 2:30 p.m. all in the Riverside Chapel of Memorial Park Funeral Home. Pastor John Charping of Cornerstone Baptist Church, Germantown will make opening remarks and the eulogy. Pastor Kelly Smith of Providence Baptist Church, Bartlett will deliver the funeral message. Interment will follow at the family plot in the historic Clinton Cemetery in Clinton, MS. The family requests that any donations be made to either of the above churches. Click the link below to view the webcasted service: http://webcast.funeralvue.com/events/viewer/60420

George Waller King passed away peacefully on September 14, 2021. He was born on March 9, 1932 in Brookhaven, Mississippi to John and Marybelle King. With his only brother, John Jr., he grew up on the campus of Mississippi College in Clinton,... View Obituary & Service Information

The family of George Waller King created this Life Tributes page to make it easy to share your memories.

Send flowers to the King family.