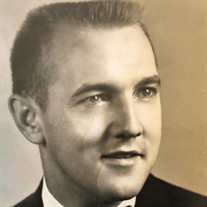 George Matthew Jennings died on Wednesday, February 9, 2022. He died just as he lived his life; on his own terms, sleeping in his own bed, cradled in his wife’s arms. A born salesman, he spent most of his career leading the sales efforts for companies that manufactured chemicals for the paper industry. He served as Vice President of Sales at Buckman Laboratories, retiring from the company after 18 years in 1987. Born on August 22, 1930, in Lavinia, Tenn., to Susie and George Jennings, George graduated from Memphis State University with a degree in Business Administration. During his college years he was actively involved with the Kappa Alpha fraternity, where he met many lifelong friends. Before he attended college, as a 17-year-old graduate of Milan High School, he enlisted in the United States Air Force, where he was stationed in Newfoundland. He was proud to take advantage of the GI Bill benefit of free college tuition upon completion of his service. Throughout his life, Mr. Jennings enjoyed golf and was an avid woodsman. He grew up playing in the woods surrounding his Carroll County home. Years later he purchased this same land, planted pine trees and turned the property into a tree farm. He spent much of his free time, weekends and vacations working to cultivate this farm. In 1987, he and his beloved wife, Betty Brown Jennings, purchased property in Eads and built a home on a pond in the woods. They spent time watching wildlife, planting and harvesting vegetables from their garden and enjoying their time in the woods. He was involved with the Big Belle Estates homeowner association and served as a Fayette County Alderman. He will be remembered as a good neighbor, lover of nature and an engaging storyteller. He valued hard work and loved his family. His daughters and grandchildren were indelibly marked by their walks in the woods, four wheeler rides and fishing with “Big G.” He taught them how to fish, how to identify types of trees and woodland plants and to love the simple beauty of nature. His Big Belle neighbors will miss his four wheeler patrols of the neighborhood and the delivery of their newspapers to their front doors. Mr. Jennings is survived by his bride of 67 years, Betty Brown Jennings, and his daughters, Jennilyn Utkov and Leanne Martin (Steve). He is also survived by five grandchildren, George Utkov, Nathan Utkov, Sam Martin (Sarah), Liza Martin and Wiley Martin. The family would like to express their thanks for all who helped with his care. A special thanks to the Big Belle neighbors and the staff at Trezevant Terrace. An outdoor memorial service will be held on Sunday, February 20 at 3 p.m. on the grounds of the Jennings home in Eads, 1245 Clara Drive. In lieu of flowers, please send donations to Le Bonheur Children’s Hospital or a charity of the donor’s choice.

George Matthew Jennings died on Wednesday, February 9, 2022. He died just as he lived his life; on his own terms, sleeping in his own bed, cradled in his wife&#8217;s arms. A born salesman, he spent most of his career leading the sales efforts... View Obituary & Service Information

The family of George Matthew Jennings created this Life Tributes page to make it easy to share your memories.

Send flowers to the Jennings family.