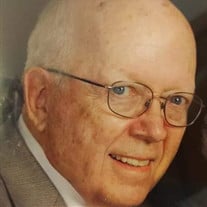 George Green was born in Duluth, MN on December 10, 1932. He passed away peacefully on Monday, December 20, 2021 at the Gardens of Germantown Memory Care where he was loved and cared for by staff and family. He served in the Air Force for five years stationed at the NATO Base in Naples, Italy. He returned to the states and was employed by Delta Airlines for thirty years and taught Customer Service in 96 cities across the system. After that, he was Director of Ground Transportation for the Memphis Airport Authority. He also was Secretary for the Scottish Rite. He was a Mason and served as Grand Commander of the Knights Templar for the state of Tennessee. While a member of the Shrine, he enjoyed singing with the Chanters. He was an animal lover and volunteered at the Memphis Animal Shelter. He was active as a veteran, participating in Forever Young and the Veterans Club at Town Village where he resided before his illness. He loved his church, his family, and travel. He was a faithful member of St. Luke’s United Methodist where he was present every Sunday. He was a member of the Christian Homebuilder Sunday School class and enjoyed the closeness of that group. He traveled for many years with his wife Betty. They enjoyed cruising on both ocean and the rivers of Europe. His favorite places to visit were the UK, Germany, and Tuscany. They also traveled with family and Homebuilder class members. He was able to visit in person or by phone with his family members in the days before his passing. He leaves his wife of 64 years, Betty, his son Richard Green (Debbie), his daughter Diane King (Harold), and son Mark Green (Judy). He also leaves grandsons Russell King, Samuel Green, and Cody Green. A private service for family will be held at Memorial Park Funeral Home and Cemetery on Friday, Dec. 31st, and a celebration of life will be held January 15th at St. Luke’s United Methodist Church at 11:00 am. The family asks that memorials be made to St. Luke’s UMC, 480 S. Highland, Memphis, TN 38111.

George Green was born in Duluth, MN on December 10, 1932. He passed away peacefully on Monday, December 20, 2021 at the Gardens of Germantown Memory Care where he was loved and cared for by staff and family. He served in the Air Force for five... View Obituary & Service Information

The family of George Green created this Life Tributes page to make it easy to share your memories.

Send flowers to the Green family.