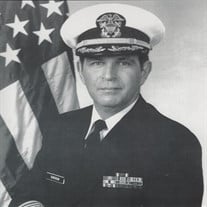 Gary was born on Jan 16, 1941 in Detroit, Michigan where he attended Farmington Elementary and High School. During his Elementary and High School years he actively engaged in the Boy Scouts of America, rising to the prestigious rank of Eagle Scout. He graduated from the University of Detroit, earning a bachelor's degree. Gary was known as the ‘life of the party and a talented dancer’. He was very social and never found it difficult to meet people. He was an active member of Tau Kappa Epsilon Fraternity at the University. His hobbies included ice skating and roller skating, as well as water and snow skiing around Michigan. He enjoyed the outdoors and racing around on lakes in Michigan, with his younger brother Dan, in an outboard powered Chris Craft boat. He always had nice, sharp cars that were kept immaculate, this obsession continued throughout his life. Upon graduation from University of Detroit, he attended Officer Candidate School in Rhode Island. He was then assigned to Navy Supply Corps School in Athens, Georgia, where he met his future wife Beverly. This naval officer swept her off her feet on the very first date. Gary loved the Military, and thrived on his assignments and extensive travel. His next assignment would be with the West Pac Fleet, on a Navy Destroyer, the USS Cochrane DDG-21 sailing from Pearl Harbor to Japan. Gary was awarded the meritorious service medal, National defense service medal, Vietnam service medal with 3 bronze stars, Vietnam campaign medal, expert rifleman medal, and expert pistol medal for his exemplary service during the Vietnam War Campaign. Gary and Beverly had a military wedding in Honolulu Hawaii at the Princess Star of the Sea Catholic Church. While living in Hawaii, he continued his tour of duty traveling from Pearl Harbor to Japan for over two years. After this tour ended, he extended his tour of duty in Port Hueneme, California where they lived for two additional years. Gary continued to be promoted throughout his career, receiving his master's degree at American International University. After completing active duty, he accepted a civilian position at the Naval Supply Systems Command in Brooklyn New York, where his first daughter Dawn was born. After New York he was re- assigned to Crystal City in Arlington, Va. He made a home for his family in Springfield, Va. for 16 years where his second daughter Julie was born. His career growth did not end in Springfield, but took him back to Brooklyn, NY where he bought a home for his family away from the busy city in Branchburg, NJ. He later transferred to Millington, TN in 1986, where he made a home in Germantown, TN. He continued with his Navy career in the Reserves, being promoted to the rank of Captain. He retired from the Navy in July of 1993. Affectionately known by his grandchildren as “Poppy”, he enjoyed the expansion of his family, especially the birth of his grandsons. After raising two daughters, Dawn and Julie, the boys were a welcome surprise. He took them fishing, boating, skiing and all the sports he enjoyed around the Great Lakes of Michigan as a young boy. He was so excited when his first granddaughter, Isabella, learned to play the violin and proud of Danielle as a soccer star. Poppy was always eager to hear about Joey, Jesse and Alex’s sporting events and games. He enjoyed attending as many activities, recitals and life events for all his grandchildren. Upon retirement he could not remain idle. He bought a travel agency franchise for his daughters to begin their careers and the desire for extensive travel with his wife. This was to be his last tour and his best. He enjoyed watching his daughters finish college, buy their first car, get married, and raise their families. Gary Sheridan died on Jan 16, 2020 in Germantown, TN after an extended illness. He was preceded by his parents June and John Sheridan of Farmington, Michigan. He is survived by his wife Beverly Malcom-Sheridan of Madison, Ga., a sister Diane Sheridan of Anchorage, Alaska and a brother Daniel Sheridan of Great Falls, Va. He left behind two daughters: Dawn Marie Sheridan-Komoroski (Joseph), Julie Allison Sheridan-Chaump (Peter), and five grandchildren: Joseph Peter Komoroski IV, Jesse Keith Komoroski, Isabella Louise Chaump, Danielle Marie Chaump and Alexander Louis-Eugene Chaump. A ceremony with full military honors will be held at the West TN VA cemetery on Friday, January 31, 2020 at 9:30 AM. A celebration of life service will be held at the home of Gary and Beverly Sheridan following the service, for close friends and family.

The family of Mr. Gary John Sheridan created this Life Tributes page to make it easy to share your memories.

Send flowers to the Sheridan family.