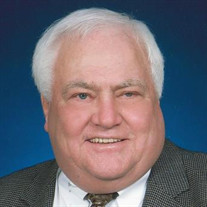 Gary M. Rutherford, 82, died at home on August 11, 2020. He was preceded in death by his wife of 38 years Marti Turner Rutherford. After the death of his first wife, he met and fell in love with another Martha. They shared 21 wonderful years of marriage. He is survived by his wife Martha Hawkins Rutherford, his two children Kimberly Mullen (Michel) of Helotes, Texas, and Kip Rutherford (Carrie) of Arlington, Tennessee, his stepson, Michael Ferguson, of Jacksonville, Florida, his brother Glenn Rutherford (Charlotte), five grandchildren, and a host of other dear relatives and friends. Gary graduated from Whitehaven High School (1956), and later Memphis State University where he was a proud member of Kappa Alpha. In addition to working with his brother Glenn in commercial real estate, Gary had a successful career at Sears Roebuck and Company. He traveled extensively during his time at Sears but spent most of his career in Chicago, Illinois. After his retirement in 1989, he returned home to Germantown, Tennessee where he remained until his death. Gary was an active member of Germantown United Methodist Church, and of the Lamplighters Sunday School Class. He served his congregation and his God with love and unwavering faith. He was generous with his time and resources. He founded and led the Men’s Prayer Group that now bears his name. Gary enjoyed golf and fellowship with friends. He was a member of the Rotary Club, Lions Club, Methodist Men, and Toastmasters Prime Timers. He served as a Trustee, and as a member of the Board of Directors for several civic and religious organizations. In addition to expressing his gratefulness to his wife, his children, his brother and their families for the joy, love, and laughter they have shared with him, Gary wanted to thank Dr. Derene Akins, Dr. William Mariencheck, and Dr. Jack Whorman, Jr. for the care they provided to him, as well as fraternity brothers and friends Mike Hopper and Charlie Stone for their love and support. The family will receive friends from 9:00 a.m. to 11:00 a.m. on Saturday, August 15 at Germantown United Methodist Church with the funeral service to follow at 11:00 a.m. The burial will follow at Memorial Park Cemetery. The family requests that any memorials be made to Germantown United Methodist Church, or a charity of the donor’s choice.

Gary M. Rutherford, 82, died at home on August 11, 2020. He was preceded in death by his wife of 38 years Marti Turner Rutherford. After the death of his first wife, he met and fell in love with another Martha. They shared 21 wonderful years... View Obituary & Service Information

The family of Gary M. Rutherford created this Life Tributes page to make it easy to share your memories.

Send flowers to the Rutherford family.