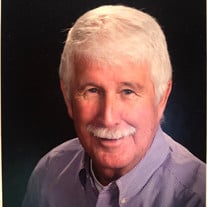 Gary Ray Harder passed away on September 5, 2021, in Memphis, TN after a brief illness at his home. He was born on October 12, 1944, in St. Louis, MO to his parents Harry and Edna Harder. He graduated from Catholic High School for Boys and Memphis State University where he was a member of Pi Kappa Alpha Fraternity. He served in the U.S. Air Force as a Russian linguist and was stationed in Turkey and then at the National Security Agency in Washington, D.C. He spent many years working for the FDIC as a bank examiner before moving to Tupelo, MS to work for BancorpSouth. Gary was a member of Knights of Columbus as well as The Exchange Club of Tupelo. He retired as an Executive Vice President over Audit and Loan Review after 25 years at the bank. After his retirement, he and Betty moved back to Memphis to be closer to family and friends. Gary was a life-long, die-hard Memphis Tigers fan and passed down his love of the Tigers to his family. Gary enjoyed playing golf with his buddies, spending time at his lake house in Hot Springs and spending as much time as possible with his family. His most favorite role was being “Poppie” to his two boys Aiden and Ethan. He was a member of St. Michael Catholic Church in Memphis, TN. Gary married Betty on July 1, 1972, and just recently celebrated their 49th wedding anniversary. He is survived by his wife Betty; two daughters, Kimberly Scott (Michael), Karen Haynes (Brian); one son, Christopher Harder (Carter); grandsons, Aiden and Ethan Scott; three brothers, Thomas Harder (Diane), Richard Harder (Sue) and Michael Harder (Judy). He is preceded in death by his parents, Harry and Edna Harder. Visitation will be on Sunday, September 12, 2021, from 5:00-8:00 p.m. at Memorial Park Funeral Home, 5668 Poplar Avenue, Memphis, TN 38119. A rosary will follow the visitation. The Funeral Mass will take place on Monday, September 13, 2021, at 10:00 a.m. at St. Michael’s Catholic Church, 3863 Summer Ave, Memphis, TN 38122. Burial will follow at Memorial Park Cemetery. In lieu of flowers, the family requests memorial tributes to: St. Michael’s Building Fund 3863 Summer Avenue Memphis, TN 38122 St. Jude Children’s Research Hospital 501 St. Jude Place Memphis, TN 38105 www.stjude.org Courage Thru Cancer 9160 Hwy 64, Suite 12, Box 312 Lakeland, TN 38002 www.couragethrucancer.org

Gary Ray Harder passed away on September 5, 2021, in Memphis, TN after a brief illness at his home. He was born on October 12, 1944, in St. Louis, MO to his parents Harry and Edna Harder. He graduated from Catholic High School for Boys and... View Obituary & Service Information

The family of Gary R. Harder created this Life Tributes page to make it easy to share your memories.

Send flowers to the Harder family.