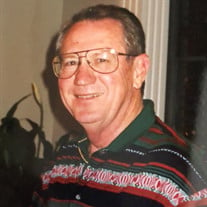 Frank J. Cannon, Jr. of Memphis, TN, peacefully passed away on April 20, 2021 surrounded by loved ones. Frank was born in June of 1930 and graduated from Southside High School in Memphis. After Frank graduated, he served in the Korean War from 1950-52. Upon discharge, he met his one true love, June, and they married in 1954. His career in typesetting began with the company, Kelly & Jameson. Together with his wife, June, he realized his dream of opening his own business. Central Typesetting was purchased with his 3 partners in 1965. Frank was passionate about the typesetting industry and this was reflected in the success of his company. With the progression of the digital age, Central Typesetting became Central Imaging and Frank partially retired in 1999 after bringing another partner into the company. He still maintained a mentor relationship with the new owner, and in 2005, they founded another company, ADS, Aviation Distribution Services, in conjunction with Lufthansa Systems of Zurich, Switzerland. ADS supplied flight navigation charts to FedEx aircraft around the world. Frank worked another 8 years and retired fully in 2013. To this day, ADS is still the mission critical vendor for flight navigation printed material in the aircraft. Frank and June were married for 60 years and had 3 children. Together they created a loving home and so many cherished memories. He is survived by all 3 children and their families, daughter, Christy Smalley and her husband, Walter Smalley, daughter, Paula Lippert and her husband, Michael Lippert, son, Randal Cannon and his wife, Shelly Cannon. Grandchildren, Emily Horne and her husband, Kevin Horne, Alexandra Hart and her husband, William Hart, Cannon Smalley and his wife, Ashley Smalley, Jason Lippert, Samuel Cannon and his fiancé, Olivia Jordan, Julia Lippert, Andrew Cannon, Blake and his wife, Wynn Turis, Anna-Katherine Turis, Jon Michael Turis. Great-grandchildren, Hank Horne, Stryker Smalley, Stella Horne, Isla Smalley, Saylor Turis, Presley Hart, Ella Collins Turis, Scarlett Horne and Jack Hart. He also leaves his brother, Virgil Johnson and his wife, Patricia Johnson and brother, Robert Johnson and his wife, Carolyn Johnson, along with many other nieces and nephews. Frank was predeceased by his wife of 60 years, June Cannon, his mother, Nell Johnson, his father, Frank J. Cannon, Sr., his stepfather, Virgil J. Johnson, his sister, Diane DeRosas, and his brother, Paul Cannon. Services will be held at Memorial Park Funeral Home, 5668 Poplar Avenue, on May 1, 2021. Visitation with the family begins at 12:00 pm. Services begin at 1 pm in the Fireside Chapel. In lieu of flowers, please consider a donation to Page Robbins, Collierville, TN in the name of Frank and June Cannon. To view the service online. Please click the link below. http://webcast.funeralvue.com/events/viewer/52993

Frank J. Cannon, Jr. of Memphis, TN, peacefully passed away on April 20, 2021 surrounded by loved ones. Frank was born in June of 1930 and graduated from Southside High School in Memphis. After Frank graduated, he served in the Korean War... View Obituary & Service Information

The family of Frank Cannon Jr. created this Life Tributes page to make it easy to share your memories.

Send flowers to the Cannon family.