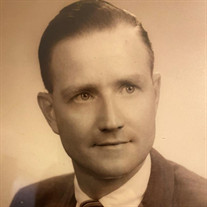 Frank Lee Camp, Jr., 95, passed away peacefully on July 10, 2021 at his home of 61 years. Frank was born August 17, 1925 to Frank Lee Camp, Sr. and Elizabeth Sutton Camp at Emory Universal Hospital in Atlanta, Georgia. He spent most of his life in Memphis where he attended Bellevue and CBHS, was in Tau Delta Tau, and graduated from Webb School in 1943. Frank was accepted by the U.S. Navy V-12 Training Program at the age of 17 and was sent to Duke University for eight months, followed by Midshipmen’s School at Fort Schuyler in Bronx, New York where he graduated in 1945. Frank was sent from San Francisco to Okinawa, Japan via the Philippines in preparation for an assignment to an LCT 974 ship, traveling the exact same path as the USS Indianapolis. Frank felt tremendous guilt in his later years about the 800 plus sailors and Marines who lost their lives in that tragedy and was often brought to tears talking about it. When the two atomic bombs forced the surrender of Japan, Frank and two of his best friends from Memphis were officers on the ship that delivered the Marines of Division 2 to Nagasaki. He then served a year in Shanghai where he and his crew stole a feces-throwing monkey who lived aboard their ship and then he literally ran into his good friend, Johnny Collier, scraping both of their ships in the dock. Frank was honorably discharged from the Navy on August 28, 1958 with the rank of Lieutenant Junior Grade (J.G.) after serving in the Reserves. Upon returning home, Frank enrolled at U.T. Knoxville where he was a member of Sigma Alpha Epsilon fraternity and graduated with a B.A. in Business. Frank worked for a short time at Barringer Cotton Company before joining his father at Frank L. Camp & Company, a family-owned cotton insurance brokerage firm where he worked all his life. As active members of the Memphis Cotton Exchange and many other cotton and shipping organizations, Frank’s company insured the majority of the cotton firms on Front Street. On March 1, 1949, Frank married his childhood sweetheart , Gail Alford, and she immediately joined him in his favorite outdoor activities of fishing, duck-hunting, duck-calling, dog-training, and field trials. Frank became accredited as a Point AKC Judge and traveled nationwide, judging hundreds of dog trials. Frank and Gail’s only child, Elizabeth Ann Camp (Lee) arrived in 1961 and Frank rarely hunted or fished without Gail and Ann, usually at OK Hunting Club in Weiner, Arkansas. Frank was the quintessential sportsman who planned his life around duck season, perfectly farmed wheat and sunflowers ahead of dove season, skulled the paddle and hooked bass with perfection, was an excellent shot before losing his eyesight, and landed hundreds of ducks with his melodic short calls, often long after shooting hours just to watch them come in. His sense of humor, intelligence and strong character endeared him to everyone he met and he had friends wherever he went. Frank was a member of Second Presbyterian Church, the Memphis Country Club, Ducks Unlimited, Rotary Club and the O.K. Hunting Club and loved eating lunch with his friends at Little Tea Shop. Frank is survived by Gail Alford Camp, his wife of 72 years; his daughter, Ann Camp Lee; his grandchildren, John Christopher Lee and Madison Ann Lee; his dog, Red; his niece Linda Holmes (Bob), and nephews, Warren Crow (Jan), Ford McDonald (Linda); Webster McDonald (Cynthia); Grady McDonald (Beth), many cherished friends and family members and his loving and devoted caregivers. Memorial gifts may be made to Shriners Hospitals for Children, St. Jude Children’s Hospital or the Humane Society of Memphis and Shelby County. Services will be held at Memorial Park Cemetery at 5668 Poplar Avenue on Friday, July 16th with Visitation at 10:30 A.M., Services at 11:30 A.M., followed by a graveside service and reception at the funeral home. To view his service online click the link below. http://webcast.funeralvue.com/events/viewer/57193/hash:A1AD3A3F3C931093

Frank Lee Camp, Jr., 95, passed away peacefully on July 10, 2021 at his home of 61 years. Frank was born August 17, 1925 to Frank Lee Camp, Sr. and Elizabeth Sutton Camp at Emory Universal Hospital in Atlanta, Georgia. He spent most of his life... View Obituary & Service Information

The family of Frank L. Camp Jr. created this Life Tributes page to make it easy to share your memories.

Send flowers to the Camp family.