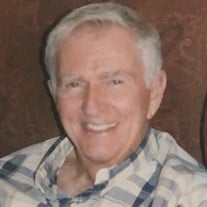 Frank Houston Adair, age 89, passed away Thursday, November 11th. He was born in Goodwater, Alabama in 1932, the son of the late Cecil and Evie Cannon Adair, as the oldest of four children. As a veteran, it seemed appropriate for him to move from this life to the next on Veteran’s Day. He passed peacefully in his sleep after a lengthy illness. Frank served in the Air Force and was stationed in post-war London, England then in Roswell, New Mexico where he met the love of his life, JoAn Stevens. They married in 1953 and moved to Graceville, Florida after his discharge from the military. He had a fascination with aviation and a dream to fly. He progressed from an airplane mechanic to crop duster to forest fire spotter to charter pilot and finally commercial airline pilot. As a captain for Southern Airways, Republic Airlines, and Northwest Airlines, Frank lived in Memphis, Tennessee the majority of his life. He was able to retire at an early age and enjoyed square dancing and traveling the country with JoAn in their camper van. Frank enjoyed adventure and the outdoors, often fly-fishing, hiking, mountain climbing, running, sailing, scuba diving, snow skiing, or playing tennis. He loved the mountains and established a second home in Colorado where he spent many happy days. Frank spent his last few years at Kirby Pines LifeCare Community and was thankful for the care he received there. When asked, he said his finest accomplishment and greatest joy was his and JoAn’s family of four children, twelve grandchildren, and nine great-grandchildren. He leaves a legacy of love, his faith in God, integrity, kindness, and deep friendships. He will be remembered for much, including his laughter, quick wit, humble leadership, and kind heart. We celebrate his life and his Savior. Frank Adair was preceded in death by his parents and his sister, Jeanette Adair Heisler. He is survived by his wife JoAn Stevens Adair, his sons Doug (Susan), Greg (Genetta), and Steve (Melissa); daughter Michelle Adair Webb (Scott); grandchildren Danny (Jen), Joanna Adair Hull (Matthew), Houston (Kyndra), Steven Bryce (Alexis), Austin, Drew, Mason, Will (Andrea), Lydia, Carter, Meredith, Kate; and great-grandchildren Jack, Ashley, Katie, Jackson Hull, Brandtley Hull, Avery, Cora, Camilla, and Riley; his sister Ann Adair Ewert; and brother Joe (Cyndy). A memorial service will be held in the Kirby Pines LifeCare Community chapel on December 4th at 2:30 pm. To place online condolences, please visit www.memorialparkfuneralandcemetery.com. As an expression of sympathy, in lieu of flowers, memorial donations may be made to St. Jude Children’s Research Hospital.

Frank Houston Adair, age 89, passed away Thursday, November 11th. He was born in Goodwater, Alabama in 1932, the son of the late Cecil and Evie Cannon Adair, as the oldest of four children. As a veteran, it seemed appropriate for him to move... View Obituary & Service Information

The family of Frank Houston Adair created this Life Tributes page to make it easy to share your memories.

Send flowers to the Adair family.