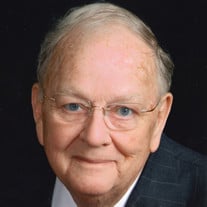 Floyd Lynn Lowery, Jr. of Germantown, Tennessee, passed away on February 1, 2020. Lynn was born to the late Floyd L. Lowery, Sr. and the late Seeley Moore Lowery in the small West Tennessee town of Milan, Tennessee on February 9, 1940. Lynn was very proud of his Milan heritage. He was a Life Boy Scout and a member of the Order of the Arrow. He graduated from Milan High School in 1958. He was honored to be appointed in 1958 to the United States Military Academy at West Point by Congressman Robert A. Everett. Lynn decided not to pursue his West Point appointment and enrolled in Memphis State University (MSU)/University of Memphis (UofM) in 1958 where he met and married his college sweetheart, Dale Turner, on January 30, 1960 at St. Luke's Methodist Church. While at MSU/UofM he was a member of Kappa Alpha Order and a member of PI Sigma Epsilon, a professional fraternity for business administration majors. Shortly after graduating from UofM in 1962 Lynn started his 37+ year career as a Special Agent with Fidelity and Deposit Company of Maryland (now part of the Zurich Insurance Group). He retired in 2000 having been Memphis Branch Manager and later Regional Manager for the Midsouth states of Arkansas, Mississippi and Tennessee. While with Fidelity and Deposit Company, Lynn made many lifelong friends as a member of the Phoenix Club (supporters of The Boys and Girls Clubs of Memphis), the Insurers of Arkansas, Mississippi and Tennessee and the Surety Association of America. He was Executive Secretary of the Memphis Chapter of the Associated Equipment Dealers. He was also an associate member of the Associated Building Contractors (BA), the Mississippi Valley Flood Control Associated General Contractors (AGC) and Tennessee Road Builders. After retiring from the Fidelity and Deposit Company, Lynn was nominated by his neighborhood association to participate in Leadership Germantown Class of 2001. This program is sponsored by the City of Germantown and the Germantown Chamber of Commerce. Lynn was a "cradle" Methodist having been baptized at the First United Methodist Church (UMC) in Milan, Tennessee. Lynn and Dale were members of St. Luke's UMS and Colonial Park UMC in Memphis. He served as Church treasurer and Chairman of the Board of Trustees at Colonial Park UMC. Lynn and Dale have been active members of Germantown UMC since 1998. He was the Memphis fund raising representative for the 200th anniversary (1774 to 1974) of the Lovely Lane Methodist Church restoration committee. Lovely lane UMC is the Mother Church of the Methodist Church in America and is in Baltimore, Maryland. Lynn played on the first official Little League baseball team in the Midsouth in Milan, Tennessee from 1949 to 1952 and because of this he wanted to pass on this enjoyable experience and became the coach of the midget baseball team at Colonial Park UMC. He later raised funds for scholarships for boys who played baseball in the association. Lynn is survived by his wife of 60 years, Dale Turner Lowery, his daughter, Seeley Lowery O'Connell (Mike) of Cordova, son, Trey Lowery of Germantown, grandchildren Kaki Knight (Logan) of Meridian, Mississippi and Collin Lowery King of Cordova, nephew, Bob Vawter of Lakeland and a niece, Barbara Vawter of Texarkana, Texas. He was preceded in death by his parents, a sister, Norma Jean Vawter and a brother, Samuel Lowery. The family will receive relatives and friends on Thursday, February 6 from 12:00 pm until the time of the funeral service at 1:00 pm at Memorial Park Funeral Home and Cemetery, 5668 Poplar Avenue in Memphis. The burial will immediately follow. Memorial contributions can be made in Lynn's name to the Germantown United Methodist Church, 2331 South Germantown Road, Germantown, TN 38138

The family of Floyd Lynn Lowery, Jr. created this Life Tributes page to make it easy to share your memories.

Send flowers to the Lowery, family.