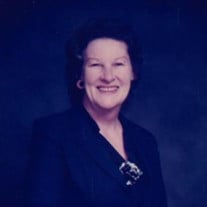 Evelyn Starr Mason of Bartlett, 96, a Christian woman departed this earth to her heavenly home December 29, 2020. She was born to William H. Starr and Dessie Hill Starr of 3606 Faxon Ave. in Memphis June 10, 1924. Preceding Mrs. Mason in death were her parents, husband James E. Mason; an infant son; sisters, Mildred Pullen of Covington, Tenn. and Dorothy (Dot) Strong of Memphis; and one brother William H. (Buddy) Starr Jr., also, from Memphis. She is survived by her daughter Linda Mason Hulsey (Bill) of Bradenton, Fla., her son Curtis (Curt) Mason of Bartlett, and grandson Will Hulsey of Louisville, KY, and his fiancé Lynnette Burgner of Lakeland, FL. Mrs. Mason’s parents always made sure she attended Sunday School and worship services at Highland Heights Methodist Church. She later taught a youth Sunday School class at the church. She was also a proud graduate of Treadwell High School having attended the school for 12 years. She loved and excelled in home economics and learned to make and repair clothing for herself and others throughout her life. She was also heavily involved in athletics at Treadwell and played tennis, softball, and was on the Treadwell women’s basketball team (forward). She also played for Jolly Cab and won a beauty contest, Miss Jolly Cab, sponsored by the company. She was employed by Sears Crosstown and began in the bookkeeping department. She was later promoted to personal/bookkeeper for the shoe buyer on the top floor in the tower. While working at Sears during World War II she often visited injured soldiers at Kennedy Hospital and was a hostess at USO dances within the fairgrounds. While volunteering for one of the dances a young Army sergeant, Jim Mason, saw her and told a fellow soldier, “She’s for me!”. They met and were married and moved to Pennsylvania. Mrs. Mason was always very active in the church. She was president of the Fairall (Waynesburg, Penn.) Methodist Women’s Society of Christian Service, president of the Bartlett Methodist Church WSCS, and a member of the Independent Presbyterian (Memphis) WSCS. She spent so much time working with the Bartlett women’s group her husband jokingly asked her if she wanted to set up a bed there. She also was a member of the Rebekah’s (a service-oriented division of the IOOF). Throughout her life she loved to work. She would often say that she looked forward to waking up in the morning and beginning the day’s work. She became a self-taught antique furniture refinishing and upholsterer in her 50’s and her restoration pieces were quite impressive. She also sewed her own draperies. Nothing, however, gave her more enjoyment than helping her husband and son restore an old stone house in Hardy, Ark. and attending the Starr family reunions in Imboden, AR. and the Mason/Brown reunions in Waynesburg, Penn. Thanks to Dawn, Jeremy, caregivers, and nurses at Quail Ridge in Bartlett where she lived for nearly 4 years and special thanks to Chaplin Angela and Crossroads Hospice. Please send any memorials to: Christ United Methodist Church, 4488 Poplar Ave., Memphis, Tenn. 38117 or Fairall United Methodist Church c/o Karen Ruckle 152 Bowlby Rd., Maidsville, WVA 26541-8045. My Father’s house has many rooms; if that were not so, would I have told you that I am going to prepare a place for you? John 14:2 For those who are unavailable to attend the service, please follow the link for live webcast http://webcast.funeralvue.com/events/viewer/44511

The family of Evelyn S Mason created this Life Tributes page to make it easy to share your memories.

Send flowers to the Mason family.