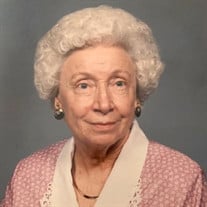 Evelyn Vashti Aeschliman, 98, of Memphis, Tennessee entered the presence of her precious Savior on December 25, 2019. She was born in Watson, Arkansas on December 8, 1921 and moved to Memphis, Tennessee as a young girl eventually meeting and marrying her sweetheart, Louis Frances Aeschliman. Together they raised a son, Richard Anthony Aeschliman, and daughter, Frances Dianne (Stephens) in a marriage that spanned over 45 years until his death in 1984. While her husband served in the Marines during World War II and was stationed in the Pacific, she worked at a Naval Ordinance plant helping to support her family. When Louis returned from the war, he obtained a job at the Memphis Publishing Company and remained employed there for 45 years. During this time, Evelyn dedicated herself to being a loving wife and mother. She was active in the Memphis community as one of the founding members of Riveroaks Reformed Presbyterian Church, as well as, being a longtime member and president of the Memphis Garden Club. Throughout the years, her home was always open to family, friends, YoungLife high schoolers, and an array of guests. Her skills in the kitchen were unmatched, and many will remember the love she poured into providing a delicious meal for all she hosted. One of her biggest enjoyments in life was traveling with her husband and family and spending time with her children, grandchildren and great-grandchildren. Summer vacations at Pickwick Lake will always hold a special place in the hearts of her loved ones. She was devout in her faith and rested in the assurance of salvation through her Savior Jesus Christ. Evelyn is preceded in death by her husband Louis; daughter, Frances Dianne Stephens, who died in 2010; one grandchild, Belinda Stephens, and two great-grandchildren, Jake Dunahoo and Brian Himmelsbaugh. She is survived by her son Richard Anthony Aeschliman, Sr. (Betsy) of Lawrenceville, Georgia; son-in-law John Stephens, Sr. (Dell) of Port Gibson, Mississippi; and grandchildren Missy Lochstampfor (Michael), Libby Dunahoo (John), Rich Aeschliman, Jr., Rachel McVey (Will), Johnny Stephens, Jr. (Melissa), Fran Dolmage (Darrell), and Lynn Himmelsbaugh (Mark). She is also survived by 15 precious great-grandchildren and her beloved sister, Betty Perdue of El Dorado, Arkansas. The funeral is scheduled for Friday, January 3rd, 2020 at Memorial Park Funeral Home on Poplar Avenue in Memphis with visitation at 10:00 am followed by the service at 11:00 am. In lieu of flowers, the family asks that memorial donations be made to Riveroaks Reformed Presbyterian Church, 1665 S. Germantown Road, Germantown TN 38138. They are grateful for your prayers and friendship. “The term is over: the holidays have begun. The dream is ended: this is the morning.” C.S. Lewis, The Last Battle (Chronicles of Narnia) Arrangements have been entrusted to Memorial Park Funeral Home and Cemetery, 5668 Poplar Ave, Memphis, TN 38119, 901-767-8930. "A Fitting Farewell For Everyone".

The family of Evelyn Vashti Aeschliman created this Life Tributes page to make it easy to share your memories.

Send flowers to the Aeschliman family.