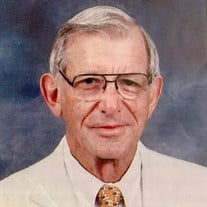 Eugene Joseph Spiotta, Sr., MD, 95, lifelong Memphian, loving husband, father, grandfather, and great-grandfather, passed away peacefully at home on Thursday, June 24, 2021. Arrangements have been entrusted to Memorial Park Funeral Home and Cemetery, 5668 Poplar Avenue in Memphis, with visitation being held there on Tuesday, June 29 from 5-7 p.m. The Funeral Mass will be on Wednesday, June 30 at 10:00 a.m. at Holy Rosary Catholic Church, 4851 Park Avenue in Memphis. The burial will immediately follow at Memorial Park Cemetery. Dr. Spiotta was both a pioneer and pillar of the Tennessee medical community. Graduated in 1948 from the U.T. College of Medicine, he served stateside in the U.S. Army as a physician during the Korean War, returning in 1953 to practice downtown at St. Joseph Hospital. In 1974, he migrated East to become a founding father of St. Francis Hospital, only recently retiring as a physician and administrator in 2018 at age 92. During his years at St. Francis, he also saw two of his sons, Dr. Eugene J. Spiotta, Jr., and Dr. Larry Brooks Spiotta, join him in the practice of medicine, which was a source of enormous pride and gratification. A brilliant diagnostician and practitioner who was as demanding of himself as he was of peers and students, Dr. Spiotta embodied his professional ideals of excellence and competence in faithfully caring for tens of thousands of patients over his 69 years of medical service. He was a valued counselor and mentor to scores of women and men in the medical field, including the cherished staff at his large medical practice, Memphis Medical Specialists. Deeply committed to research and technology for advancing patient care in cardiology, Spiotta also served the larger medical community in many roles, including Clinical Professor of Medicine at his alma mater UTHSC; Director of Medical Education at both hospitals; founder of the UTHSC Family Practice Residency Program; Chairman of the Clinical Studies Committee and Special Care Units, and Medical Director of Non-Invasive Cardiology, at St. Francis. He received many awards and accolades through the years, including Outstanding Physician by the Tennessee Medical Association (2012), Memphis Italian Community Member of the Year (2000), and Christian Brothers High School Hall of Fame (1986). Not content to limit himself strictly to medicine, Dr. Spiotta broadened his professional life as an entrepreneur and investor in his own projects as well as those of others he enthusiastically sponsored, in and outside the family. With dear friends Pat and Vernon Kerns, he co-developed a beautiful resort community on Greers Ferry Lake called Tannenbaum, which was the site of countless happy family vacations as well as of a dramatic plane crash that he miraculously survived with his wife and two youngest children in 1971. His brave maneuvers as pilot saved all their lives. Not merely a man of business and science, Dr. Spiotta was a man of faith, deeply committed to the Catholic church. He was a communicant of Holy Rosary and recognized by his parish with the Rosarian Award. He literally never missed Mass in his lifetime, from his years as an altar boy downtown at St. Thomas Church to his last months of life observing Mass by television. He treasured his role as a lay reader, and he cared for countless Catholic priests and religious over the years as their caring physician. To his wife Dorothy, he was the most devoted husband, adoring companion, and gallant caretaker the world has ever known. Beginning with courting during WWII, they had one of the rare and special marriages written about in romance novels. During the last two decades of her life, Dorothy suffered from chronic illnesses, and Gene was by her side, holding her hand constantly, in every diagnosis and treatment, and to the very end. They enjoyed countless, enjoyable games of tennis, golf, and gin rummy, and always ate breakfast and dinner together. In later years, it was he who cooked-- and he excelled at it. To his family, he was “Dad,” “Granddaddy,” and “Gene, Sr.” And to him, family was everything. He truly held up our sky and provided the foundation beneath our feet. Nothing gave him more joy than hearing about the adventures of his family members, and he never hesitated to get involved, as a sponsor or as an audience, as the occasion might require. Eugene is preceded in death by his high-school sweetheart, co-pilot, and wife of 73 years, Dorothy Jane Brooks Spiotta, his beloved parents, Mary Grillo and Guido Spiotta, his sisters Esta Spiotta Parish (Harry), and Yola Spiotta Coco (Vincent), and by his granddaughter, Sarah Jane Spiotta Peppel, and granddaughter-in-law, Cynthia Caceres Baker. He is survived by his 6 children and spouses, Eugene Spiotta, Jr. (Gail), Larry Spiotta (Hollye), Michael Spiotta (Ann), Laura Spiotta Myrland (Bob), Judy Spiotta Baker (James A., Jr.), all of Memphis, and Robert Spiotta (Yvonne), of Atlanta. Dr. Spiotta was the proud, generous, and enthusiastic fan of his 18 grandchildren, Eugene Spiotta III, Timothy Spiotta, Whitney Spiotta Heffernan, Daniel Spiotta, Sarah Jane Spiotta Peppel, Erin Spiotta Egan, Kimen Spiotta Brinkley, Lauren Spiotta Cannon, Michael Spiotta, Jr., Dorothy Spiotta, Lynn Green, Kristin Green Dixon, Robert Myrland, Jr., J. Austin Baker III, Rebecca Baker Crucifixio, Lawson Baker, Marguerite Spiotta, and Marianna Spiotta. And last, the proud patron and fan of his 28 great-grandchildren. The family wishes to thank his caregivers Phanetra Lee and Rosa Broome, as well as our beloved lifelong caretaker Idell Reed. Memorials in his honor may be given to Christian Brothers High School, Holy Rosary Catholic Church, or the medical charity of your choice.