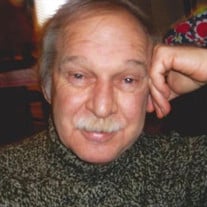 It is with heavy hearts that we announce Ernie Snyder of Germantown, Tennessee passed away on Monday, August, 16th, 2021, at the age of 70. After a recent battle with lung cancer, Ernie died peacefully with his beloved wife Judy and their children Jason and Amy by his side. Ernie was born in Memphis on December 21st, 1950, to father, William Ervin Snyder and mother, Naomi Holly Nesbit Snyder. The youngest of two sons and two daughters, Ernie joined the Air National Guard at age 18 enrolling in basic training at Sheppard Air Force base in Wichita Falls, TX and eventually attaining the rank of Staff Sergeant. Returning to his hometown of Memphis, TN, he enrolled at Memphis State University while working part-time as an attendant at Methodist University Hospital. There, he met his soon to be wife in nurse, Judy Cole Snyder of Dyersburg, TN. Soon after their marriage in 1973, he withdrew from formal studies to pursue his full-time career at the Union Pacific Railroad where he continued working for 40 years. Ernie worked in several capacities at Union Pacific, reaching the position of Assistant Trainmaster and a transfer to Arlington, TX, before returning to Memphis and his long-term role as Yardmaster, where he could achieve better work/life balance and spend more time with his family. He fully invested that time into various activities such as Cub Scout Denmaster, Head Softball Coach, and was forever designing and working on home projects, possessing a gifted ability in carpentry and auto-mechanics. Ernie was preceded in death by his parents and is survived by his wife; children Jason Ray Snyder (Kim) and Amy Marie Serck (Chris); grandchildren Blake Austin Snyder, Nathan Cole Snyder, Kailyn Elise Snyder, Liam Cole Serck, and Lily Marie Serck. He is also survived by his brother Dr. Buck Snyder and sisters Martha Gray and Margaret Hastings. A visitation for Ernie will be Saturday, August 21, 2021, from 5 pm to 7 pm in the Riverside Chapel of Memorial Park Funeral Home. The funeral/celebration of life service will be on Sunday, August 22 at 2 pm in the Riverside Chapel at Memorial Park Funeral Home. Interment to follow at Memorial Park Cemetery. All are invited to attend the visitation and service. People wishing to honor Ernie’s lifelong commitment to family and community are encouraged to make donations to the Germantown Cumberland Presbyterian Church. To view the webcasted service click the link below: http://webcast.funeralvue.com/events/viewer/58982/hash:3D369AB6D20525D1

It is with heavy hearts that we announce Ernie Snyder of Germantown, Tennessee passed away on Monday, August, 16th, 2021, at the age of 70. After a recent battle with lung cancer, Ernie died peacefully with his beloved wife Judy and their children... View Obituary & Service Information

The family of Ernie L. Snyder created this Life Tributes page to make it easy to share your memories.

It is with heavy hearts that we announce Ernie Snyder of Germantown,...

Send flowers to the Snyder family.