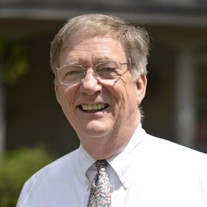 Ernest Lee Harris, 75, passed away on February 28, 2022, at home surrounded by family. Ernie was born on January 8, 1947, in Memphis, Tennessee, where he lived for his entire life. He graduated from Central High School and Memphis State University. He is preceded in death by his mother, Vera Schmidt Harris; his brother, Louis Harris; and his brother-in-law, Toby Poole. He is survived by his wife, Katherine Norowski Harris; his three daughters, Amelia Hardman (Bryan), Chloe Weeks (Jason), and Elise Blount (Richard); his brother Floyd Harris (Barbara); his sister Barbara Poole; and his sister-in-law, Marilyn Harris. He was also blessed and survived by seven grandchildren: Lee, Katie Wilkes, and Olive Hardman; Arden, Everett, and Linnea Weeks; and Miles Blount. Above all else, Ernie was a man of family and faith. He was a devoted and loving husband to his wife, Katie, for close to 50 years, and his three daughters were a great source of pride and joy for him. He loved nothing more than to brag on his girls, attend their various events, and spend time with them and their families. Ernie and his wife were active members of Second Baptist Church, and their church family meant a great deal to them. Ernie served the church for many years as a deacon and through working with the children’s and youth departments as his daughters grew. His long, successful career in sales at Tension Envelope Corporation showcased who Ernie truly was: a people person. Ernie never knew a stranger, and others were drawn to his upbeat, kind, and goofball personality. At any gathering, someone would recognize him and call his name. He enjoyed playing golf and spending time in the great outdoors hiking, canoeing, gardening, or simply working in the yard. He was an avid and loyal follower of Memphis Tigers basketball and football, and he attended countless games through the years. Ernie loved a good party, and as his family and friends know well, no one made a better Pronto Pup than “Big Ern!” Services will be held on Saturday, March 19, at Second Baptist Church, with visitation at 11:00 a.m. followed by a memorial service at 12:00 p.m. The family asks that in lieu of flowers, please honor Ernie with a donation to West Cancer Clinic or Second Baptist Church.

Ernest Lee Harris, 75, passed away on February 28, 2022, at home surrounded by family. Ernie was born on January 8, 1947, in Memphis, Tennessee, where he lived for his entire life. He graduated from Central High School and Memphis State University.... View Obituary & Service Information

The family of Ernest Lee Harris created this Life Tributes page to make it easy to share your memories.