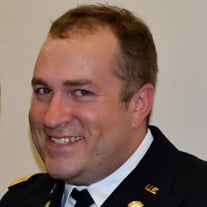 On Monday, December 30, 2019 Erik Schultheis, loving husband and father of four children, passed away unexpectedly at the age of 36, in Lakeland, TN. ​Erik was born December 16, 1983 in Columbus, MS to Jeff and Christine (Schultheis). Erik joined the Army in 2001 where he proudly served his country for 18 years up until the time of passing as a CW2. In Erik’s civilian life, he was a phenomenal Boat Captain for Kirby Inland Marine. Also, he was currently working on his bachelor’s degree in Accounting where he received Honors on the Dean’s List. On July 16, 2011, he married Danielle Lynn Motes. They raised two sons Jacob and Luke, and two daughters Olivia and Britain. ​He is preceded in death by his Grandfather Billy Carol Knox Sr, William Roy Schultheis and Grandmother Adelaide Margaret Schultheis. ​He is survived by his wife Danielle, his four children, Jacob, Luke, Olivia, and Britain. His mother Christine and stepfather Dennis Bankert, father Jeff and stepmother Robin Schultheis, two sisters, Lauren (Dustin) Owen, Sara (Ron) Schreiber, brother Josh (Ashley) Schultheis, grandmother Hazel Knox along with several aunts, uncles, cousins, nieces and nephews. ​Erik will always be remembered for his quick wit, infectious smile, and zest for life. ​The family will receive friends from 12 p.m. until 1 p.m. with a service immediately following the visitation at Hope Presbyterian Church in Memphis, TN on January 9, 2020. Interment will be at West TN Veterans Cemetery at a later date.​

On Monday, December 30, 2019 Erik Schultheis, loving husband and father of four children, passed away unexpectedly at the age of 36, in Lakeland, TN. &#8203;Erik was born December 16, 1983 in Columbus, MS to Jeff and Christine (Schultheis).... View Obituary & Service Information

The family of Erik Schultheis created this Life Tributes page to make it easy to share your memories.

Send flowers to the Schultheis family.