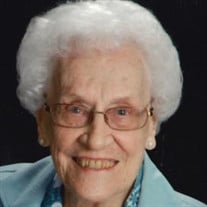 Emma Lee Williams Mauldin, a life long Memphian, died December 16th at the age 100. She was preceded in death by her husband, Jesse Raymond Mauldin and a sister Mildred Williams Hall and her son-in-law Sully Tucker. She is survived by two daughters, Mary Lee Mauldin Boggs (Carl) and Linda Ann Mauldin Tucker. Emma Lee has 5 grandchildren, Carrie Lee Henderson Chiaro (Mark), James Allen Henderson (Brooke), Catherine Lauren Henderson Weltman (Weltman), Mary Beth Tucker, and Michael Raymond Tucker (Blair), and great grandchildren, Evan Michael Chiaro, Dominic Riley Chiaro, Robert Timothy Chiaro, Kenley Hall Henderson, Andrew James Henderson, Jacob Brooks Weltman, Hannah Cate Weltman, Jaxson Gage Tucker, Jaycie Sarah Dean Crawford, Jenna Elizabeth Ann Tucker, and Julia Lucy Blair Tucker. A member of St. Luke’s United Methodist since 1930, she was active in the Loyalty Class for approximately 60 years. Emma Lee was a member of the United Methodist Women’s Group for many years. She was a charter member of Gotten Woods Garden Club, formed in September, 1951. She was president of the club three times and enjoyed the many flower shows and parties. Emma Lee loved to play bridge and had many friends. She met her future husband on a blind date November 9, 1940, arranged by a dear friend. They went to see the movie “Gone with the Wind”. Raymond “Ray” asked for a date on the next afternoon. It was Sunday and they spent the afternoon riding in his 1940 Ford car. That date was the beginning of many dates. Raymond was later drafted into service in January, 1942. He spent 3 1/2 years in the Air Force until he was injured and sent home. Emma Lee finished high school in 1938. She went to business school and worked for an electric supply company for six years. The day he returned from the South Pacific he called to tell her he was being sent to Ft. Thomas Convalescent Hospital in Kentucky. She gave her boss notice that she was quitting her job and getting married. They married at her home because he couldn’t kneel because of the leg injury. The friend, Martha Bell, that introduced them was her only attendant. Raymond and Emma Lee had may nieces and nephews and they dearly loved each of them. They did a lot of traveling during their years together. They visited all 50 states and made two trips to Europe and visited nine countries. They made many trips with their family and friends and enjoyed every trip. As years passed they seemed to get older and decided to move into a retirement home. In 2006 they moved to Germantown Plantation and found a beautiful apartment. They had 3 1/2 years doing nothing but eat and be with their family. Raymond passed away December 17, 2009, and she continued to live alone there. They enjoyed all of the families and new babies. For those unable to attend the service please follow the link for live services. http://webcast.funeralvue.com/events/viewer/43133

Emma Lee Williams Mauldin, a life long Memphian, died December 16th at the age 100. She was preceded in death by her husband, Jesse Raymond Mauldin and a sister Mildred Williams Hall and her son-in-law Sully Tucker. She is survived by two daughters,... View Obituary & Service Information

The family of Emma Lee Williams Mauldin created this Life Tributes page to make it easy to share your memories.

Send flowers to the Mauldin family.