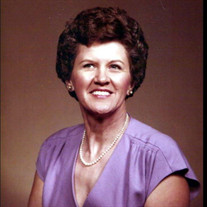 Betty was born in Jones County, SD to Nicholas Edward Daum and Elizabeth Hoekman Daum on July 29,1930. She grew up on a ranch in SD with her 11 brothers and sisters. She was used to working hard. She rode horses, milked cows and helped with other ranch chores. She also would tell us of having to kill rattlesnakes! She graduated from Murdo High School in SD. She then trained at Sacred Heart Nursing School in SD to become a RN. She traveled with some of her nurse friends further west after graduating from nursing school. She met her future husband William (Bill) Sloas while working in a hospital near Bremerton, Washington while he was stationed there in the Marine Corps. They later married in Shafter, CA. They moved to New Madrid County in southeast MO. Bill farmed near Portageville, MO where she worked with him and raised their 3 children. She did work briefly as a nurse at a hospital in Hayti, MO as well. They moved to Memphis, TN in June of 1969 after an aluminum company bought a lot of the farm land in the Portageville area. Betty was a loving wife and mother and all that knew her loved her. She enjoyed traveling with her family and made many trips with Bill and her children. She also enjoyed fishing at Horseshoe Lake with her husband and children. She especially enjoyed visiting her family in South Dakota. She loved working outdoors in the yard and planting flowers. She was a wonderful cook and gracious host during family gatherings. She and Bill are members of Colonial Methodist Church. She faithfully took their 3 children to church when they were young and through their teenage years. She read the Upper Room devotional daily up until she became too ill. She always was up to learning new things and was game for adventure. She used the computer and surfed the internet but was technically challenged at times, however she was persistent in figuring it out. She enjoyed her IPad and would get on Facebook to keep up with her family. She loved having her grandchildren over playing card and board games with them and attending any of their activities. She was preceded in death by her parents, her brothers/sisters-in law; Nicky, Pete/Doris, Johnny, Sam/Rose, Dick/Judy, Ed/Evelyn and her sisters/brothers-in-law Marie (Floyd) Joanne Shelton and Verle Miller. She is survived by her husband of 67 years Bill and their children Steve (Lisa) Sloas, Terri(Larry) Allen and Lori(John)Berry as well as grandchildren Brooke Allen, Lindsay (Caleb) Toole, Whitney (Gavan)Young, Stephen (Kelsey) Sloas and 4 great grandchildren. She is also survived by her sister Katie Miller, brother Nick(Pat) Daum,brother-in-law Bill Shelton, sister-in-law Jane Daum and many nieces and nephews. She will be missed by her husband and all of her family. Brother Jim Muston will give the Eulogy at Memorial Park Funeral Home in Memphis, TN during a small private service. Reception to follow after burial at Memorial Park Funeral Home. In lieu of flowers, memorials may be sent the Alzheimer’s Association https://act.alz.org/site/Donation2?df_id=32112&32112.donation=form1 or the charity of your choice. To view the online memorial tribute video. Click the link below to view. https://www.tributeslides.com/tributes/show/P2RS4SXP4FRTQW5W Click the link below to view here service online. http://webcast.funeralvue.com/events/viewer/65475/hash:CC0B8A42C8303E3B

Betty was born in Jones County, SD to Nicholas Edward Daum and Elizabeth Hoekman Daum on July 29,1930. She grew up on a ranch in SD with her 11 brothers and sisters. She was used to working hard. She rode horses, milked cows and helped with... View Obituary & Service Information

The family of Elizabeth Kathleen Sloas created this Life Tributes page to make it easy to share your memories.

Betty was born in Jones County, SD to Nicholas Edward Daum and...

Send flowers to the Sloas family.