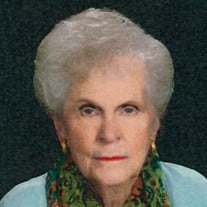 Elizabeth White Riggins, of Germantown, Tennessee passed away January 31, 2020, with her family at her side. Elizabeth was born in Ardmore, Tennessee, to Frank and Annie Laura White July 1, 1933. At an early age she moved to Memphis, graduated from Central High School and attended Galloway United Methodist Church where she met Harry Martin Riggins, whom she married in August 1952. In addition to Harry she leaves three children, Keith (Missy) Riggins, Laura Riggins and Kirk (Chris) Riggins and two grandchildren, Jordan and Jack Riggins. Elizabeth loved people and was a longtime active member of Colonial Park United Methodist Church. She was an avid University of Tennessee fan and was a member of Windyke Country Club where she played golf with the ladies’ group and The Mississippi Seniors where she played in the couples’ group with Harry at various clubs across the south. A boater since the kids were little, she enjoyed what was to be her last ride late last summer. One to seldom sit still, Elizabeth played bridge, bunko and looked forward to meeting her ‘lunch bunch’ friends as often as possible. For many years she volunteered at the St Jude Classic Golf Tournament. Elizabeth was a member of the Germantown Heritage Woman’s Club, Germantown Historical Commission and Allenby Lakes Neighborhood Association. She will be missed by her family and friends. Memorials may be made to Colonial Park UMC or a charity of your choice. Visitation will be held from 12:00 PM until service time at 2 PM in The Riverside Chapel at Memorial Park Funeral Home and Cemetery, 5668 Poplar Ave. Memphis, TN 38119. Interment will be in Memorial Park Cemetery following the chapel service. Please visit www.memorialparkonline.com to leave online condolences for the family.

Elizabeth White Riggins, of Germantown, Tennessee passed away January 31, 2020, with her family at her side. Elizabeth was born in Ardmore, Tennessee, to Frank and Annie Laura White July 1, 1933. At an early age she moved to Memphis, graduated... View Obituary & Service Information

The family of Elizabeth W. Riggins created this Life Tributes page to make it easy to share your memories.

Send flowers to the Riggins family.