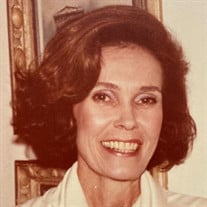 Elizabeth Lee Atcheson Humphreys died peacefully on August 11, 2021 surrounded by her family. She was born in Memphis on February 22, 1928, the only child of the late Elizabeth Barnett and Samuel Richard Atcheson. She was also preceded in death by the love of her life and husband of 71 years, James Fraser Humphreys, Jr. as well as their infant son. She leaves as her legacy three children, Rick Humphreys, Fraser Humphreys, III (Lily) and Beth Humphreys Moore (Bruce). Also surviving are six grandchildren, Libby Moore of Nashville, Tennessee, Jim Moore (Lura) of Austin, Texas, Hayly Humphreys Schmidt (Evan) of Athens, Georgia, Sam Moore of Memphis, Fraser Humphreys, IV (Fallon) of Birmingham, Alabama and Mary Margaret Moore also of Memphis. Betty Lee, as she was known to her family and friends, graduated from Central High School and attended the University of Tennessee, Knoxville where she majored in Spanish and Journalism and was a proud member of Chi Omega Sorority. She began her life‘s journey by being born on George Washington’s birthday, or rather agreeing to share hers with him. On visits over the years to his Mount Vernon estate in Virginia she could always be counted on to inform the docents of her shared birthday with the father of our country. Even once as a little girl she was snuck in by the guides and allowed to actually rock in his rocking chair! Another memorable story she told was when she learned of the attack on Pearl Harbor on a Sunday morning in December 1941, while roller skating in her neighborhood. She was so alarmed she skated straight into the house to tell her parents, receiving a scolding for scratching the floors until of course, she told them the news. She was quick to acknowledge that World War II had been one of the defining epochs of her generation and in later years became a big fan of the bestseller “The Greatest Generation“. She frequently teased her children and grandchildren by declaring “I must admit, we really are the greatest!“ Betty Lee was always immensely proud of the fact that her father, Sam Atcheson was a nationally recognized handball champion. In return, he was even more proud of her , affectionately calling her “Darling Daughter“, more often than her own name. A sweeter father-daughter relationship would be hard to envision. Sam frequently took Elizabeth and Betty Lee with him whenever possible to tournaments all over the country. She and her mother once attended a luncheon hosted by First Lady Eleanor Roosevelt at the Willard Hotel in Washington while Sam played in a match attended by President Franklin Roosevelt. Betty Lee’s warm, kind and patient demeanor endeared her to all who were fortunate enough to have known her, but none more so than her adoring husband, her three children, son-in-law and daughter-in-law and six grandchildren. Her big-heartedness also extended to her children and grandchildren‘s friends. The Humphreys’ home was always open - the setting for many parties and even a “formal” in their back yard in the 70s! It was not uncommon for her children to come downstairs and find their friends, deep in conversation with her, arriving sometime earlier and seemingly having forgotten who they came to visit! With jubilant greetings and affectionate hugs, exclamations of “Mama!” and “Betty Lee!” could be heard throughout the house. In learning of her passing one friend said, “She was a friend to us all.“ Another said, “She was in the Mom‘s All-time Hall of Fame.“ When she became a grandmother, she was well-prepared, having already selected her grandmother name - and from that day on was known as “Toots“, just one example of her wry sense of humor. In addition to her nine decades as a devoted daughter, wife, mother and grandmother, she loved serving as a 1979 Duchess with her Duke, Fraser, to represent the Mystic Society of Memphi in Carnival Memphis. She was also active in the community serving mostly for Le Bonheur Club, Les Passees and Kings Daughters for many years. Her warm, outgoing personality made her especially successful in each of the clubs’ annual fundraisers, garnering the most donations for several years. Later in life, she achieved one of her lifetime goals of becoming an artist - an accomplishment of which her husband was extremely supportive and proud. Converting bedrooms in both their Memphis and Florida homes, she spent countless hours perfecting her colorful and unique style and even exhibited her work in various shows. Her beautiful paintings have not only brightened her home, but the homes of her children, grandchildren and others. It must be said of Betty Lee that she personified the finest qualities of that most precious of God’s creations: “The True Southern Lady.” She was a friend to all and consistently demonstrated gracefulness , kindness, gentility and an abundance of support, understanding and love for everyone, while still remaining a force to be reckoned with. Betty Lee was a lifetime member of Idlewild Presbyterian Church where she married her beloved husband and biggest supporter, Fraser, in 1948. Most importantly, she encompassed a resounding lifelong relationship with our Lord Jesus Christ and appropriately, her favorite activity in her last few years was listening to and singing gospel hymns. A visitation will be held for friends and family at Memorial Park Funeral Home from 4 – 6 on Wednesday, August 18th. The funeral service will be held at Idlewild Presbyterian Church On Thursday, August 19th at noon. The family wishes to thank Dorothy Webster, Kita Jordan, Janet Coleman and Lia Clayborn for the loving care and kindness they showed Betty Lee in her final years. In lieu of flowers, donations can be made in her memory to Idlewild Presbyterian Church or the charity of the donor’s choice.

Elizabeth Lee Atcheson Humphreys died peacefully on August 11, 2021 surrounded by her family. She was born in Memphis on February 22, 1928, the only child of the late Elizabeth Barnett and Samuel Richard Atcheson. She was also preceded in... View Obituary & Service Information

The family of Elizabeth "Betty" Humphreys created this Life Tributes page to make it easy to share your memories.

Send flowers to the Humphreys family.