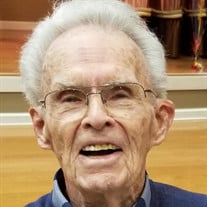 Edgar Luther Linthicum, Jr. of Germantown died on Tuesday, June 30, 2020, at the Village at Germantown. He was 101 years old. Edgar was born in Baltimore, Maryland on August 8, 1918 to Edgar Luther and Isabelle Linthicum. He was married for 65 years to the love of his life, Achsah Dorsey Linthicum, who preceded him in death in 2008. His brother, Lee Linthicum and sister, Amelia Linthicum Wade also preceded him in death. Edgar leaves two sons, Bruce (Debra) Linthicum of Boca Raton, Florida, and John (Amy) Linthicum, of Germantown and five beloved grandsons, Chris (Mandy) Linthicum, Travis Linthicum, Daryl and Blaine Loyd and Kyle Griffis. He also leaves three beautiful great-granddaughters, Harper Loyd, Adaleigh Linthicum and Stella Holloway. Edgar was a graduate of the University of Maryland and was a CPA. He began his career with Davison Chemical Company in Baltimore which was later acquired by W.R. Grace Chemical Company. As Vice-President and Chief Financial officer of W.R. Grace, he was relocated to Memphis and moved his family here in 1969. An avid golfing family, Edgar and Achsah enjoyed their friends at Chickasaw Country Club and Germantown Country Club, where he was Member Emeritus and played until he reached his 97th year. They also shared many wonderful memories of fun trips with golfing buddies and business/pleasure trips to Europe during his years with W.R. Grace. The Family would like to thank all his friends and the staff at the Village at Germantown for their friendship and service over the past 14 years. A private family service will be held at Memorial Park on Monday, July 6th. In lieu of flowers, donations can be made to Youth Villages or St. Jude Childrens’ Research Hospital.

Edgar Luther Linthicum, Jr. of Germantown died on Tuesday, June 30, 2020, at the Village at Germantown. He was 101 years old. Edgar was born in Baltimore, Maryland on August 8, 1918 to Edgar Luther and Isabelle Linthicum. He was married... View Obituary & Service Information

The family of Edgar L. Linthicum created this Life Tributes page to make it easy to share your memories.

Send flowers to the Linthicum family.