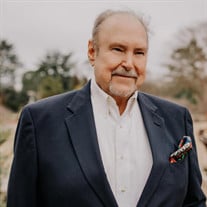 Edgar Seagle Hunt, Jr., passed away peacefully at home surrounded by his loved ones after a valiant battle with prostate cancer on July 1, 2020. Born in Chattanooga, TN, he was preceded in death by his father, Edgar Seagle Hunt, Sr., his mother JoAn Norrell Hunt and his sister Patricia Ann Hunt Hicks, all of Chattanooga, Tn. Edgar Seagle Hunt Jr, was a longtime resident of Collierville, TN and Watercolor, Florida. A graduate of Chattanooga High School, The University of Chattanooga and The Woodrow Wilson College of Law, Ed was a member of the Executive Committee at PDU/CAT. He was an innovator in the trophy industry for over 50 years where he received national recognition and won numerous industry awards for his business acumen. A man of diverse interests, Ed was also known for his love of classic automobiles and was an avid car collector. He was a member of the Rolls Royce Owners Club, the Bentley Drivers Club, the Morgan Owners Club, the British Car Club and the Memphis Classic Chevys. He was also an accomplished musician as an award-winning tenor drummer and was the Drum Major of the Wolf River Pipes and Drums and had amassed an outstanding collection of vintage Gibson guitars and mandolins. As a Charter member of Alta (Atlanta Lawn Tennis Association) he played competitive tennis for many years and was an active member of Hope Church in Collierville, TN. Ed was the loving, patient, supportive and wise patriarch of the Hunt Family. It was the love for his family that meant the most to him until the very end. It was his 58th Wedding Anniversary on July 3rd, and he was looking forward to celebrating it with the love of his life, Nancy Mullins Hunt, his high school sweetheart. She caught his eye and they never looked back. He is survived by his loving wife and their three sons, Edgar Seagle Hunt III of Collierville, TN, Dennis Lance Hunt of Atlanta, Georgia and Richard Mullins Hunt and his wife Leslie McGettrick Hunt of Eads, TN. Ed was always a devoted grandfather and is also survived by his three grandchildren, Edgar Seagle Hunt IV of Nashville, Morgan Bailey Hunt and Richard Mullins Hunt, Jr. both from Eads, TN and attending the University of Alabama. His grandchildren meant the world to him. He was a nurturing, wise, loving and immensely proud grandfather. His pride in each of their accomplishments was always evident in the stories he shared and by his being an ever-present and available figure in their lives. The family requests that memorial donations be made in Ed’s name to The Briarcrest Fund for Athletics at www.briarcrest.com/give or mailed to Briarcrest Christian School, 72 S. Houston Levee Road, Eads, TN 38028. A Celebration of Life Service will be held at Memorial Park Funeral Home at 1:30 PM on Saturday July 18, 2020 with family receiving guest at 1 pm. A repast will be held following the service at the family home at 2113 Standing Rock Avenue, Collierville, TN To view the Celebration of Life Service. Please click the link below. http://webcast.funeralvue.com/events/viewer/33355

Edgar Seagle Hunt, Jr., passed away peacefully at home surrounded by his loved ones after a valiant battle with prostate cancer on July 1, 2020. Born in Chattanooga, TN, he was preceded in death by his father, Edgar Seagle Hunt, Sr., his mother... View Obituary & Service Information

The family of Edgar Seagle Hunt Jr. created this Life Tributes page to make it easy to share your memories.

Send flowers to the Hunt family.