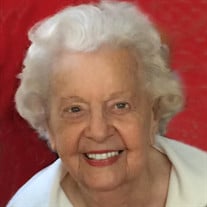 On Wednesday, November, 25, 2020 Earline Patterson, loving wife and mother of four children passed away at age 96. Earline was born on September 23, 1924 in Birmingham AL to Earl and Ann Snedden. She married Ralph G. Patterson in 1944 and they raised two daughters, Margaret Anne and Barbara Jean and two sons, Ralph Jr. (Pat) and David. A devoted wife, mother and grandmother, Earline loved to celebrate life and family, maintaining an open door to her home for one-and-all. She had a beautiful, loving spirit and infectious smile. She continually celebrated life and family making even the smallest of occasions feel like the most important event in the world which, to her, they were. Earline gave much of her time and energy in service at Second Presbyterian Church. Her spiritual "gift" was her generosity of her time, resources and amazing hospitality. For over 40 years she volunteered at Second Presbyterian Church and served as Charge Hostess. Any event of any size, from 7 to 700, she would coordinate the set up, décor, and menu. Her daughter Margaret later joined her in that role and later took on those responsibilities faithfully following in her mother's footsteps. They were the "Dynamic Duo," by all accounts. Earline also had a leading role in the 3M's ~ "More Mature Members," monthly lunch program at the church. She was also a member of the Priscilla Circle and served as its chairperson as well as on the Council of the Women of the Church. Earline was also active in the Care Giver's Group, a Lay leader, member of the Chapel Class and was awarded the Outstanding Christian Services Award from Second. The family favorite and central event of annual celebrations was "The Patterson Corral," which took place the night before Thanksgiving. As everyone returned to Memphis they would drop their bags and rush to gather at Mom and Pop's for Corky's and S'mores. This continued for 26 years giving all family members traveling in a place to gather and catch up before the main event at Margaret's. It was bitter sweet that she would leave to be with the Lord on the evening of what would have been the 27th Annual Corral. Earline was preceded in death by her husband Ralph, two sisters, Ann and Jean, her daughters Margaret and Barbara, her son David, and son-in-law Frank. She is survived by her son Pat Patterson (Elise); four grandsons, Jim Donato (Alisa), Scott Brakefield (Michelle), Wesley Brakefield and Bailey Patterson; two granddaughters, Marla Armstrong (Snapper) and Kendall Hodges (Mark); and ten great grandchildren; Sam and Victoria Donato, J and Gil Armstrong, Noah, Shep and Win Brakefield, Alexandria Gravitt, and Coleman and Knox Hodges. Memorial contributions can be made to the Church Health Center, 1350 Concourse Ave Suite 142, Memphis, TN 38104. The family will receive relatives and friends on Thursday, December 3 from 1:00 pm until the time of the funeral service at 2:00 pm at Memorial Park Funeral Home and Cemetery, 5668 Poplar Avenue in Memphis. The burial will immediately follow. To view the webcasted funeral service click the link below. The service will be available to view up to 90 days after the service. http://webcast.funeralvue.com/events/viewer/41578 To view the tribute slideshow, please click the link below: https://www.tributeslides.com/tributes/show/H8R39RDFGLYJY5JQ

On Wednesday, November, 25, 2020 Earline Patterson, loving wife and mother of four children passed away at age 96. Earline was born on September 23, 1924 in Birmingham AL to Earl and Ann Snedden. She married Ralph G. Patterson in 1944... View Obituary & Service Information