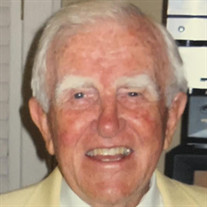 On Thursday, April 29, 2021, Earl Junior Fuller, surrounded by his loving family, passed away peacefully in his sleep at the age of 94. Born August 25, 1926, in Bellevue, Iowa, Earl was the son of Martha and Earl W. Fuller. He was an Eagle Scout, WWII naval veteran, and a graduate of Bellevue High School, Iowa State University, Wheaton College, and Washington University. He will be remembered by family members, friends, and former colleagues for many reasons. Always active, Earl was an avid unicycler who enjoyed teaching others to ride as much as riding himself. He was fond of snow skiing and water sports of all kinds. Earl also enjoyed collecting Native American artifacts, practicing and teaching taxidermy, singing, bird watching, writing the family Christmas newsletters, juggling, riding four-wheeled motorcycles and his Kubota, creating pottery and yard art, and studying and respecting nature. Earl’s career focused on teaching science to children and he will be remembered as “Professor Bones” on WKNO’s science show, “Scientific Bureau of Investigation.” He was a park ranger, museum curator, and science curriculum supervisor for Memphis City Schools. He was also the coordinator of MCS’ Mobile Science Traveling Trailer and Planetarium. Earl also spent countless hours cleaning up Sardis Lake, and he never met a buffet he didn’t like. Earl was the loving husband of Emogene for almost 60 years. They had three children, Martha Fuller (Rick Jennings), Jeffrey Fuller (Anita) and Robyn Maxwell (Jack). Earl was fondly called “Pop Pop” by his five grandchildren, Abigail Fuller, Trevor Maxwell, Emily Fuller, Jillian Maxwell, and Donnie Fuller. If you wish to make a donation honoring Earl Fuller, the family requests it be made to the Alzheimer’s Association at act.alz.org. The service celebrating the life of Earl Fuller will be held at 2:00 on, Friday, May 7, 2021, at Memorial Park, Memphis. Visitation to be held beginning at 12:30 prior to funeral service. To view the webcasted service click the link below: http://webcast.funeralvue.com/events/viewer/53624/hash:D8EC8B73D4394CA2

On Thursday, April 29, 2021, Earl Junior Fuller, surrounded by his loving family, passed away peacefully in his sleep at the age of 94. Born August 25, 1926, in Bellevue, Iowa, Earl was the son of Martha and Earl W. Fuller. He was an Eagle... View Obituary & Service Information

The family of Earl Junior Fuller created this Life Tributes page to make it easy to share your memories.