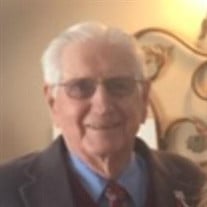 Duncan Leon Godbold, 92, died on October 4, 2020 at Baptist Reynolds Hospice House in Collierville after a recent stroke. Mr. Godbold was born on January 8, 1928 in Tunica, Mississippi to Robert and Annie Godbold. He had a successful career as a pipefitter at Buckman Laboratories for 33 years. He married Elizabeth Leslie on March 11, 1972. They raised a daughter, Leslie Godbold Ragan, together. Mr. Godbold served our country as a PFC, 7th Calvary, US Army and Staff Sargeant, 516th Air Police Squadron, in the US Air Force. He served during both World War II and the Korean War. He moved to Memphis after his service and was heavily involved in Aldersgate United Methodist Church and volunteered at Baptist East hospital. His family made this tribute to him, “Daddy was one of the kindest people that you could ever meet, he opened his heart to everyone that he met. Even at the last, you could still see his sweet heart.” He is survived by his wife of 48 years, Elizabeth Godbold, daughters Lauren Godbold Smith and Leslie Godbold Ragan, grandchildren Bill Smith, Stephanie Smith Stanley, Adley Ragan, and Weston Ragan, great-grandchildren Lexie and Bella Stanley, brothers Robert and Sam Godbold, sisters-in-law, Betsy Godbold and Jeanette Leslie, sons-in-law Ricky Smith and Kevin Ragan, grandson-in-law Mike Stanley and other cousins and friends. The family would like to thank you for your loving prayers and support. In lieu of flowers, please send a memorial to Aldersgate United Methodist Church or a charity of your choice. The family will receive relatives and friends on Wednesday, October 7 from 9:00 am until the time of the funeral service at 10:00 am at Memorial Park Funeral Home and Cemetery, 5668 Poplar Avenue in Memphis. The burial will immediately follow. A full obituary will be posted as soon as it becomes available. To view the webcasted funeral click the link below: http://webcast.funeralvue.com/events/viewer/38101

Duncan Leon Godbold, 92, died on October 4, 2020 at Baptist Reynolds Hospice House in Collierville after a recent stroke. Mr. Godbold was born on January 8, 1928 in Tunica, Mississippi to Robert and Annie Godbold. He had a successful career... View Obituary & Service Information