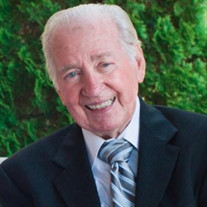 Rev. Dudley Wayne Condron, 95, passed away on Tuesday, September 14, 2021, at his home in Memphis, Tn., surrounded by friends, family, ministers, and neighbors. Born in Wagoner, Oklahoma in 1925, Rev. Condron graduated from Central High School in Muskogee, Oklahoma; from Bethel College in McKenzie, Tn., from Cumberland Theological Seminary in McKenzie and Memphis, and did post-graduate work at The University of the South at Sewanee, Tn. Always a painter, Dudley at age 70 entered the University of Memphis where he received a Fine Arts degree. As a retiree, he painted prolifically and presented one-man exhibits at The Circuit Playhouse, Theater Memphis, Randolph Galleries and several other Memphis venues. He was featured artist on the cover of Memphis City guide magazine in Aug. 2013. As an ordained Cumberland Presbyterian minister, Rev. Condron held pastorates in Tulsa, Ok., Shelbyville, Tn., and Huntland, Al. before accepting a position of Director of Education for Missions and publisher of mission materials, including the Missionary Messenger monthly magazine and all mission materials for the church. He retired in 1992 after 25 years of service. Married to Lynette Hamilton in 1952, they had three children: Alan Condron, Cheryl Condron Leger (Bob) and Robert Condron (Donna), the latter two surviving him. Later he married Joyce Becton Robinson who has two surviving children, Elicia Scobey (Allison) and Leigh Anne Robinson. Son, Howard Dain Robinson, preceded him in death in 2017. Dudley has nine grandchildren: Jessica Condron, Milan, Tn., Justin Condron (Brandy) of Humboldt, Tn., Christopher Leger (Cari) of Collierville, Tn., Katie Leger of Raleigh, NC, Claire Little of Collierville, Tn., Hillary Anderson of Germantown, Tn., Trevor Scobey of Chapel Hill, N.C., and Hannah Alexander (Justin) of Martin, Tn. He also has two great-grandchildren, Silas and Arden Anderson. Rev. Condron was a much-loved and respected minister for 72 years. He was a World War II veteran having served in the US Navy. He will be missed by a host of friends, parishioners, and family who morn his passing. A service will be at Memorial Park Cemetery, 5668 Poplar Ave., Memphis at The Grotto, on Thursday, September 23, 2021 at 2:00 PM. Officiating this service will be Rev. Peggy Jean Craig, Rev. William Warren, Rev. George Estes, and Claire Little. All participants and guests are requested to wear masks and socially distance. Donations may be made to any Cumberland Presbyterian Church and its ministries and St. Jude Hospital.

The family of Rev. Dudley Wayne Condron created this Life Tributes page to make it easy to share your memories.

Send flowers to the Condron family.