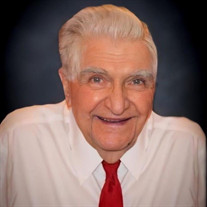 Donald Howard Glowen, born December 22, 1926, passed away peacefully the day after his 95th birthday, with his loving daughter Christine Ventre by his side. Don leaves behind daughter Christine L. Ventre and husband Daniel of Germantown, TN; son Ronald G. Glowen and wife Ann of Omaha, NE; grandchildren Amy Lindsey and husband Justin, Lisa Walker and husband Jason, Logan Ventre and wife Jennifer, Colleen Fritch and husband Jeff, and Katie Van Geem and husband Tim as well as 13 great-grandchildren. Mr. Glowen was preceded in death by his parents, Albert and Hattie Glowen, his wife Lusena “Lu” Glowen; son Jack Glowen; grandson Brian Glowen, and great-grandson Lochlan Ventre. Don Glowen was born in Chicago during the depression, the youngest of 5 children. He attended Lane Tech High School in Chicago while working part time at a fabrication company producing artillery shells for the war effort. After graduation, Don enlisted in the Navy to join his buddies already in battle. Don largely served as an aerial gunnery instructor for Navy pilots. Don married Lusena in 1951 producing 3 children; Chris, Jack and Ron. By this time, Don worked for the Union Pacific Railroad as a sales executive, retiring in the mid 80s. He and Lu settled initially in Little Rock, AR but later moved to Memphis, TN to be closer to their children. Don was a skilled wood-worker, craftsman and hobbyist who produced revered articles for his children and grandchildren. Even today such treasures as doll houses, nativity sets, stained glass windows and candle holders remain on display in almost everyone’s home. Even into his 80’s, Don was an avid golfer, a skill he honed entertaining perspective customers until failing eyesight caused him to quit. Don took it all in stride, living life to the fullest, jumping at any chance to share time with his family. A skilled conversationalist, Don became fast friends with anyone and everyone with whom he came into contact. Together, Don and Lu traveled the world extensively, a luxury they truly enjoyed. In their later years, they resided at Kirby Pines Retirement Community, active in countless activities gaining them prominence amongst the residents there. Don and Lu were married an incredible 69 years, a testimony to their love for each other and dedication to their family. Services for Don Glowen will be held at Memorial Park Funeral Home located on 5668 Poplar Avenue, Memphis, TN 38119 on January 14, 2022. Visitation will begin at 1:00PM followed by service at 2:00PM and inurnment at 3:00PM. At the request of the family, in lieu of customary remembrances, donations in the memory of Donald H. Glowen may be made to any of the following: Alzheimer’s Association: https://www.googleadservices.com/pagead/aclk?sa=L&ai=DChcSEwjVzKrVpZj1AhWWxIYKHXezADoYABADGgJ2dQ&ae=2&ohost=www.google.com&cid=CAASEuRoiDjjYT1ACinSiaE4t6yyqQ&sig=AOD64_3xt0pGMGTYD15zU5E84FP1pb8FMQ&ved=2ahUKEwiO-5_VpZj1AhUuQjABHYV6DV4QqyQoAHoECAMQBQ&dct=1&ad Or a charity of your choice. Family and friends will have the opportunity to watch the service by accessing the link below: http://webcast.funeralvue.com/events/viewer/66396/hash:1F5BC6B104F4C608 Memorial Park Funeral Home and Cemetery, 5668 Poplar Ave, Memphis, TN, 38119. (901) 767-8930.

Donald Howard Glowen, born December 22, 1926, passed away peacefully the day after his 95th birthday, with his loving daughter Christine Ventre by his side. Don leaves behind daughter Christine L. Ventre and husband Daniel of Germantown, TN;... View Obituary & Service Information

The family of Donald Howard Glowen created this Life Tributes page to make it easy to share your memories.

Send flowers to the Glowen family.