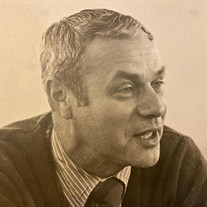 Donald L Glaser Sr. passed away February 16, 2022 with his Grandaughter Gabby Kellum and his son Donald Glaser Jr at his side. Don was born on June 29, 1932 in Louisville Kentucky to Art and Lillian Glaser. He was preceded in death by his wife Janet Glaser and youngest son Gregory Glaser. Living family members include his eldest son Donald Glaser Jr, daughter in law Theresa Glaser, Greg’s wife Deborah Glaser, grandsons Donald Glaser III, Jeremey Glaser and his wife Emily, Timothy Glaser and his wife Megan, granddaughter Gabby Kellum and her husband Mason Kellum granddaughter Gracie Glaser along with 3 great grandchildren Abbie Glaser, Liam Glaser and Stassi Francos. Don was a Navy veteran and served aboard the USS Intrepid. While stationed in Millington he met Janet at a dance and they were married in 1953. When he was honorably discharged from the navy, Don enrolled in a new engineering college named Christian Brothers College and graduated summa cum laude in electrical engineering. That would be the start of a 37 year career with the college. In 1963 Don went back to Louisville Kentucky and obtained his MSEE. Upon returning to CBC he became the director of the Computer Center and held this position for 18 years. His professional memberships include: EEE, AFEE, and the highly selective Tau Beta Pi. Don attended Our Lady of Perpetual Church and for a while sang in the choir. He was also a 4th degree in the Knights of Columbus. Guns, shooting, hunting, fishing and almost anything outdoors were a pleasure to him. He was a lifelong member of the NRA, a life member at Memphis Sport Shooting Association, and loved to shoot Single Action Shooting Society (cowboy) with an alias of “Buffler Chip”. Don will be greatly missed by family and friends but heaven has gained a jewel. He will be happy because he is now with the love of his life Janet. In lieu of flowers please make donations to Birthright of Memphis. The family will receive relatives and friends on Monday, February 28 from 5:00 p.m. until 7:00 p.m. at Memorial Park Funeral Home, 5668 Poplar Ave, Memphis, TN, 38119. The funeral mass will be Tuesday, March 1 at 10:30 a.m. at Our Lady of Perpetual Help Catholic Church, 8151 Poplar Ave, Germantown, TN, 38138. Interment to follow at Memorial Park Southwoods, 5485 Hacks Cross RD, Memphis, TN 38125

Donald L Glaser Sr. passed away February 16, 2022 with his Grandaughter Gabby Kellum and his son Donald Glaser Jr at his side. Don was born on June 29, 1932 in Louisville Kentucky to Art and Lillian Glaser. He was preceded in death by his wife... View Obituary & Service Information

The family of Donald L Glaser Sr. created this Life Tributes page to make it easy to share your memories.

Donald L Glaser Sr. passed away February 16, 2022 with his Grandaughter...

Send flowers to the Glaser family.