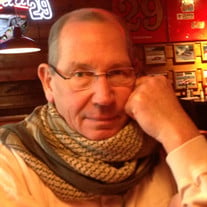 Celebrating a life of love, faith and eternal hope, Donnie now rejoices after a courageous and hard-fought battle with cancer. He was surrounded by loved ones who will continue to honor his legacy by living life to the fullest. Born November 18, 1951 in Chattanooga, TN, son of Donald L. Cottam and Dorothy Creath Cottam. He was preceded in death by his father, Donald L. Cottam and his daughter, Jennifer Marie Cottam. Donnie is survived by his wife, Dyann, of 51 years, his sons Donald Lee Cottam, III and Carlton Creath Cottam (Emily). He leaves six beautiful grandchildren; Jayden Elaine, Kaylee Alyse,Claire Elizabeth, Ella Grace, Evan Creath and Benjamin Joseph. He also leaves his mother, Dorothy Creath Cottam and siblings Charles Creath Cottam (Paula), James Allen Cottam (Debbie), Christopher Creath Cottam and Missy Stovall (Andy). After serving in the Coast Guard, Don went on to graduate from The University of Memphis. His professional career began in the family beauty business which then transitioned into owning/operating two of his own beauty supply stores. Later, he owned and operated a restaurant and served as the General Manager at Mud Island. He pursued his dreams of B&B ownership and then went on using his expertise in the food and real estate industries. In his retirement, Donnie’s passions turned him to a new venture - giving back to the patients and health care providers at the West Clinic and Church Health Center that were so instrumental in the health care of his daughter during her own battle with cancer. Don and Dyann established “Jécardé” to grow, nourish, pot, decorate and deliver plants of all kinds to these facilities honoring the cancer warriors, survivors and heroes of these facilities while paying tribute to the legacy of Jennifer. Known by some as a Rebel, by others as a coach, teacher or Hero, but by most as a loving and devoted husband, father, son, brother, uncle, grandfather and friend. Until we meet you again, Donnie, Don, Dad, DC2, we love you! "Don's service requires casual beach attire. Shorts and sandals are appropriate and your Hawaiin shirt would be perfect!" In lieu of flowers, the family would appreciate donations to the Church Health Center, 1350 Concourse Ave. Suite 142, Memphis, TN 38104, 901-272-7170.

Celebrating a life of love, faith and eternal hope, Donnie now rejoices after a courageous and hard-fought battle with cancer. He was surrounded by loved ones who will continue to honor his legacy by living life to the fullest. Born November... View Obituary & Service Information

The family of Donald Lee Cottam Jr created this Life Tributes page to make it easy to share your memories.

Send flowers to the Cottam family.