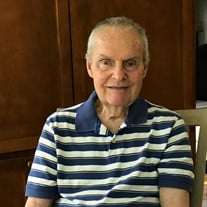 Don Martin Enders, age 88, passed away February 17, 2021, in Memphis, Tennessee, surrounded by his wife, children and grandchildren. Born in 1932 in Madison, Wisconsin, Don attended Edgewood High School, where he lettered in baseball. He was self-sufficient from an early age, putting himself through private high school before joining the U.S. Navy in 1950. As a radar operator on the U.S.S. Coral Sea, Don traveled the world, including Europe, the Mediterranean and the Middle East, during his four-year tour of duty. Upon honorable discharge from the Navy in 1954, Don enrolled in the University of Wisconsin at Madison under the G.I. Bill. By taking classes continuously, he graduated in three years with a degree in accounting. While a freshman at the University of Wisconsin, Don met Phyllis Naujoks at the Rathskellar pub in the Memorial Union. They dated for two years before marrying June 15, 1957, in Madison, Wisconsin, at the Monona Lake home of Phyllis’ aunt Kay Kanneberg. Don would repeatedly tell anyone he met during their 63-year union that marrying Phyllis was the best decision he ever made. After graduation, Don joined Arthur Andersen & Co., then one of the “big eight” public accounting firms, in the audit division. Over 30 years, he gained increasing responsibility before becoming a partner. He was the rare individual who had only one employer in his entire adult life. Over his career, he worked in both the Milwaukee and Chicago offices and traveled extensively as part of his responsibilities. He retired in 1987 at age 55 and liked to tell people that by the end of his life he had been retired for more years than he had been professionally employed. Don’s four daughters fondly recall attending Milwaukee sporting events, mostly Bucks and Brewers games, and watching Badger games on TV with their dad. Don was equally a fan of those teams in championship seasons and during long droughts, often saying, “The good thing about being a pessimist is that you’re never disappointed.” He loved spending summers at the condo in Lake Geneva, which generated many wonderful family memories. He also enjoyed spending time at the Milwaukee Athletic Club, with friends from his regular golf foursome, and poring over his taxes no matter the time of year. He was passionate about supporting his daughters, and would never impose his views, giving advice only when asked. At the end, Don focused primarily upon others. He asked family to say goodbye to his friends, and listed off the doctors, nurses and caregiver “pals” to thank. Don is survived by his wife, Phyllis Irene (Naujoks) Enders; and daughters, Susan Enders, Karen Galvin, Diane Roberts (Charles) and Linda Roberts (Heath). Don is also survived by seven grandchildren: Blake Baranowski, Michaela Galvin, Julia Galvin, Matthew Roberts, Christopher Roberts, Andrew Roberts, and Jonathan Roberts; as well as his brother-in-law, Robert Naujoks, and nieces and nephews. Don was predeceased in death by his father, Emil Enders; aunts Louise Enders and Hilda Onsrud; and sister, Lois Enders. A private memorial service will be held in the summer in Pensacola, Florida, where he spent many of his Navy years. In lieu of flowers, donations may be made to Edgewood High School, 2219 Monroe Street, Madison, WI 53711.

Don Martin Enders, age 88, passed away February 17, 2021, in Memphis, Tennessee, surrounded by his wife, children and grandchildren. Born in 1932 in Madison, Wisconsin, Don attended Edgewood High School, where he lettered in baseball. He was... View Obituary & Service Information

The family of Don Martin Enders created this Life Tributes page to make it easy to share your memories.

Send flowers to the Enders family.