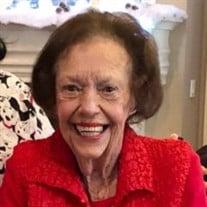 Wife, mother, grandmother, great-grandmother, and friend to many passed away on June 9, 2021 at the age of 85 peacefully at her home surrounded by her family. Dixie, the Queen of Christmas, was the life of the party and everyone loved her energetic personality. She was born in Earle, Arkansas on May 23, 1936 to Bert and Loraine Dickey. She was one of two children. Dixie graduated from Hutchison School and upon graduation went to Southern Methodist University where she was a member of Chi Omega Sorority. In 1959, she married the love of her life, William Fredick Wolbrecht Jr. (Bill). Bill and Dixie lived life to the fullest. Dixie spent her entire life dedicated to her family and various charity organizations. Some of her accomplishments were President of Les Passees, President of Subsidium, President of Ikebana, President of The Woman’s Exchange, Commissioner of the Memphis Airport Authority, Chairman of the Muscular Dystrophy Telethon, President of Children’s Charity of America and served on the board of the Botanical Gardens. She was an avid member of the Hunt and Polo Club. She also was a member of Mullins United Methodist Church. Most importantly to her, she did all of this while raising three children. Dixie was preceded in death by her mother Loraine Wallin Dickey, father Bert German Dickey, brother Bert German Dickey Jr and her husband William (Bill) Frederick Wolbrecht Jr. She leaves behind her children Wynn Wolbrecht Revelle (Ray), William (Ric) Frederick Wolbrecht IV (Gena), Dixie (Dee Dee) Wolbrecht and niece LuLynne Dickey Hicky (Phil) and has five grandchildren Linzie Tedford Mullins (Ray), Jordan Wynn Grant (Jared), Billy (Trey) Wayne Tedford lll, William (Will) Frederick Wolbrecht V, Jeni Grace Wolbrecht and three great grandchildren. The family would like to extend a grateful thanks to Jason Gibert and staff (Senior Care Solutions) for their excellent care and service. The family will receive relatives and friends on Monday, June 14th from 9:00 am until 11:00 am. There will be a private graveside service at 11:00am for the family. Everything will be held at Memorial Park Funeral Home and Cemetery, 5668 Poplar Avenue in Memphis. In lieu of flowers, the family requests donations to be sent to The Woman's Exchange of Memphis, (88 Racine St. Memphis, TN 38111) or to the charity of the donor's choice.

Wife, mother, grandmother, great-grandmother, and friend to many passed away on June 9, 2021 at the age of 85 peacefully at her home surrounded by her family. Dixie, the Queen of Christmas, was the life of the party and everyone loved her energetic... View Obituary & Service Information