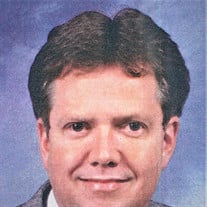 Dennis Alan Vaughan, 70, passed away Tuesday, July 13, 2021 of complications related to Parkinson’s disease. He was born December 15, 1950 in Camden, Arkansas to Lamar and Betty (Faith) Vaughan. He spent most of his life in Memphis, TN and the surrounding area. Denny graduated from Central High School in Memphis, Tennessee and later from the University of Memphis (then known as Memphis State University). He served in the U.S. Naval Reserve from 1969 to 1974. He became a Certified Public Accountant in 1976. Denny was a knowledgeable accountant and the sole practitioner of Vaughan CPA Services for many years until his retirement in 2014. Denny was dedicated to his profession but also devoted time to spend with his family. As a young man, he rode motorcycles with his brother, Tommy. He spent many hours at family gatherings discussing accounting with his brother and daughter, who were also CPAs. Throughout the years, he spent many days boating and fishing on the Little Red River and Greers Ferry Lake. He enjoyed attending Memphis Tigers football games with his daughters. At home, he liked to relax on the porch, BBQ on the grill, work on the yard, and occasionally play the electric guitar. Even as an adult, he spent many nights eating family dinner and visiting with his parents and brother, whom he loved dearly. Towards the end of his life, he watched endless hours of John Wayne country-western movies while sitting in his recliner with his grandson, Henry. He was adored by his parents, brother, children, grandchildren, and nieces. The legacy of Denny’s kind spirit, gentle nature, and sense of humor will live on through his family. He will be greatly missed but never forgotten. Preceding him in death were his parents and only brother, Thomas Vaughan. He is survived by his three daughters: Amy Bawcum (Jason Bawcum), Rachel Vaughan (Logan Burns), and Rebecca Vaughan; and five grandchildren: Jenna Bawcum, Denver Bawcum, Nash Bawcum, Henry Burns, and Jameson Burns. The funeral will be held at Memorial Park Cemetery at 5668 Poplar Avenue on Tuesday, July 20th, 2021, with Visitation at 10:00 A.M. and Graveside Services at 11:00 A.M.

Dennis Alan Vaughan, 70, passed away Tuesday, July 13, 2021 of complications related to Parkinson&#8217;s disease. He was born December 15, 1950 in Camden, Arkansas to Lamar and Betty (Faith) Vaughan. He spent most of his life in Memphis, TN... View Obituary & Service Information

The family of Dennis A. Vaughan created this Life Tributes page to make it easy to share your memories.

Send flowers to the Vaughan family.